Britain is no longer a country for and says "Farewell" to an old Celt, born an aristocrat who chose to become a potter, called James Campbell

James, who has died at the age of 77, was born in the summer of 1942, during the Second World War, in the ancestral home of the aristocratic Clan Campbell, Cawdor Castle on the Moray Firth in Nairnshire, Scotland. He himself belonged to a branch of the Clan based in Pembrokeshire in Wales, the Stackpole Estate having come into their hands by the marriage of the 16th Thane of Cawdor, Sir Alexander Campbell, to the Welsh heiress Elizabeth Lort in 1689.

He was the second son of John Duncan Vaughan Campbell of Cawdor, 5th Earl of  Cawdor of  Castlemartin and Wilma Mairi Vickers, herself the daughter of Vincent Cartwright Vickers, the Director of Vickers Limited and London Assurance. From an early age he would have been familiar with the motto over the crest of the family coat of arms : CANDIDUS CANTABIT MORIENS  'The pure of heart shall sing when dying' and under the shield : BE MINDFUL.

Grandfather Vincent Vickers, who died three years before James was born, was an extraordinary man, who between 1910 and 1919 was a Governor of the Bank of England, while at the same time worked as a humorist and artist who wrote and illustrated a children's book,'The Google Book'. As a boy James would have had his copy of Grandad's book with its illustrations of weird and wonderful birds. Many years later James would refer to his recurrent black bird : "The bird is a frequent presence; it often seems to be searching for something within the landscape, and it is probably me."

Memories of his early childhood, spent either in the ancestral home of Castlemartin in the County of Pembroke, West Wales and of Cawdor Castle left an indelible mark on him and he always counted his blessings for growing up in and being visually stimulated by these two regions of Celtic Britain with their sometimes ferocious landscapes of great lyrical beauty.

Over 60 years later he would write : "I make pots. They are hand built, individual pieces, usually slabbed and coiled, using a red clay from Staffordshire, masked with a white slip. After the first firing I paint on the surface with oxide pigments and underglaze colours, using imagery based on the special places of my childhood, remembered, observed, and still longed for. I was fortunate to be brought up in the North of Scotland and West Wales, two landscapes of great lyrical beauty, which have been a dominant influence, particularly the wild and windswept coastline of South Pembrokeshire. I try to combine form with image, in such a way that they meet as equal partners, in an object with domestic and poetic overtones."

As a boy he found Cawdor Castle "a surprisingly friendly, warm, grey sandstone castle, tucked into the edge of the Big Wood above the Cawdor Burn and looking out to the north over the fertile coastal plain towards Nairn." As a child he lacked the companionship of his sister Caroline, who was 12 years his senior and brother Hugh, who was 10 years older and grew up as a boy who loved nature, solitude and a contemplative existence, who was free to wander and dream amongst the trees, by the river, along the lake or by the sea as his poem revealed :

He recalled : “In the special and magical places of my childhood in Wales and Scotland, I was always drawing. When I was very small, the images were of aeroplanes; it was 1944 and there was an aerodrome near our house. The landscape began to appear when I was in my teens and away at school in unhappy exile from these sacred havens, which always offered a place to travel inner worlds of dream, joy and peace. The pain of separation and the longing to reconnect have been dominant forces in most of my subsequent work."

The school he referred to was the boys public school of Eton in Berkshire, which may have been part of his unhappy exile, but had the saving grace of bringing him, at the age of 15, under the influence of the British ceramics artist who taught ceramics and sculpture, Gordon Baldwin, who was only ten years his senior. It was under his tutelage that young James had his first experience of making art out of clay and it was Gordon who introduced him to Hans Coper, whose aesthetic Gordon embraced.

He later recalled that Gordon was "probably the most inspiring, intelligent and exciting teacher of that time" who "opened my eyes to the deeply enjoyable and serious business of making pots and making marks on them. It slowly dawned on me that pottery was something that one could do, not just on Saturday afternoons, but for a lifetime." He recalled that his first pots "were initially sculptural, slab built forms."

In 1959 the Royal College of Art, a postgraduate institution, ran a pilot scheme that involved accepting a few students straight from school and James applied and after a brief entrance procedure, gained a place.

When he arrived, the RCA was in a state of transition because the Professor of Ceramics, Robert Baker had left his post to join the Board of the Royal Worcester Porcelain, taking some of his most talented colleagues and students with him. He had handed over to David Douglas, the Marquis of Queensberry, from Crown  Staffordshire, who ushered in was a period favouring one-off, hand-made ceramics alongside the industrial variety.

James now found himself in the company of fellow students David Hockney, Derek Boshier, Ossie Clark and Zandra Rhodes. In addition, as well as being an unworldly provincial, he was several years junior to his fellow students who, typically, had already completed one or even two art/design courses and in some instances, served two years National Service in the Armed Forces.

James recalled that "it was not an easy time for me. The College was never a teaching school and I missed Gordon's tutorial input." Nevertheless, he was was taught to draw by Dicky Chopping who, in addition to teaching, designed the covers for Ian Fleming's James Bond books and despite his feelings of being overawed in the company of his more assertive contemporaries, James progressed and to his considerable surprise, emerged in 1964 with a first class diploma.

It was the early 1960s, at a time when a degree without a teaching certificate entitled you to become a teacher he secured a post teaching pot making on a foundation course, where students were taught across disciplines, from ceramics to fashion. At the same time, he set up now for his first pottery workshop near Ross-on-Wye and started exhibiting his pots. 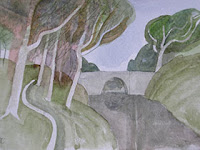 After several decades of work with sculptural ceramics, in the early 1980s when he had no access to a workshop, he began a great deal of drawing  : landscape, architecture, people and birds and a move to a new house and the decision to make his own kitchen ware had the practical result of reintroducing him to domestic vessels. He then moved from making the smaller domestic pieces to larger platters and bowls and, as a natural result of the time he had spent drawing, applied his draughtsmanship and colour to these.

He recalled : "When I started making ceramics again – initially utilitarian vessels for my own use – it was not long before imagery started to appear on the pots. I now make pots and drawings, sometimes combined, sometimes not. The imagery still informed by the landscapes of my childhood, remembered and observed.”

"Over the years spent as potter, teacher and draughtsman, I came to love drawing, variously, as a tool for generating ideas about shape, for speculating about form and image, and as a language for putting down images of landscape observed, remembered, and imagined. The pastels and watercolours have developed over time, from sketchbooks full of attempts to capture the poetry of these special places: they are meditations on landscape. Some are closer to the external facts, some closer to the inner world. The bird is a frequent presence; it often seems to be searching for something within the landscape, and it is probably me."

In 1983 he made a 6 week trip to Japan which confirmed his instinct that he was a European potter, not an orientalist and that he should express a European aesthetic in both form and surface. When pressed on specifics about his exposure to Japanese ceramics, he said that the relative looseness and freedom of some Japanese and Korean potters in the making process, were what impressed him and caused him to incorporate this in his making method. Observing potters at work in Tokoname, he realised that he had, without being fully aware, become tight and overly precise. Freedom and flow of movement in form and image were to become the essence of his future work. 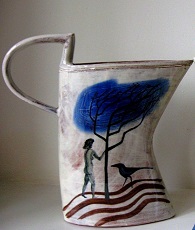 "I try to make the form strong enough in its own right to hold the drawing, to be muscular and even dynamic. Too much movement, however, would make it an incompatible partner, so there is a balance to be struck. The drawing must not overwhelm the shape, but at the same time it must have a content of its own and be more than decoration."

His reputation was such that, in 1998 at the age of 56 and, for three years, he served on the Arts Council of Wales, Art and Crafts Advisory Panel and in 2002 was appointed as a Selector, for the Arts and Crafts Exhibition, National Eisteddfod of Wales.