Britain will be no country for the Grandchildren of old men

It's good news for old men and women aged 65, in terms of life expectancy, but not for their grandchildren. New data from the Office for National Statistics has shown that, while these old men have gained 31.5 weeks of life, and 33.5 weeks of healthy life, since 2009, by contrast, their grandchildren born in England and Wales are likely to spend a larger proportion of their lives in poor health than them. The proportion of life expected to be spent in good health has decreased between 2009-11 and 2016-18, from 79.9% to 79.5% for their grandsons and from 77.4% to 76.7% for their granddaughters. 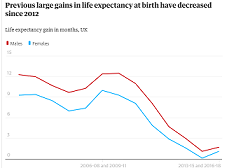 Liz Emerson, Co-Founder of the 'Intergenerational Foundation' said : “We, as a society, are failing our children and grandchildren disgracefully on intergenerational fairness grounds if we cannot give them the same healthy life prospects as enjoyed by older generations today. To change these outcomes we must end childhood deprivation in all its forms and that means prioritising funding for children.”

Aideen Young, Evidence Manager at the 'Centre for Ageing Better', agreed : “These inequalities are unacceptable and much more must be done to ensure that the opportunity of longer lives is shared equally. Tackling health inequalities at all ages must be a top priority for whoever forms the next government.”

Theresa Marteau is Director of the Behaviour and Health Research Unit at the University of Cambridge and with colleagues has written an article in the Lancet entitled 'Increasing healthy life expectancy equitably in England by 5 years by 2035 : could it be achieved?'

They make a compelling case for structural and policy interventions that create healthier environments for behaviour change related to tobacco, alcohol, diet, and physical activity and outline how these are likely to be more effective than either the personalised information or precision public health approaches currently favoured in the British Government's proposed public health strategy on prevention.

They report : 'Rises in child poverty, homelessness, food poverty, and a deterioration in mental health have been observed. These have occurred at the same time as a reversal of investment in public services, with the biggest cuts in the most deprived areas. Previous research has shown that public investment improves health outcomes, and disinvestment has the opposite effect. It is time to acknowledge the elephant in the room—the underlying causes of the disturbing health trends in England—and to design appropriate policies to reverse them.'
Posted by ...............................JohnBoy at 08:16