Britain is no longer a country for old newspaper editor, John Richards and his 'Apostrophe Protection Society'

When John, who is 96 years old, was born back in 1923, his English lessons in school when he was growing up in the 1930s, would have placed a heavy emphasis on the correct use of English grammar. This set him in good stead for his working life in journalism, of which he spent about three quarters as a reporter and the remaining quarter as a sub editor. His task as a sub was to prepare reporters' copy for insertion into the paper. This involved tightening the story, changing clumsy phrasing and cutting to length, because each story was fitted into a page rather like a jigsaw.

In addition. an important part, was correcting grammatical errors and, in particular, adding, deleting or moving apostrophes. It constantly amazed John how often reporters, especially the younger ones, seemed to have no idea of the correct use of this very useful little device. He recalled : "I spent most of my time as a reporter and sub-editor, including at The Brighton Argus in the 1960s, and the misuse of apostrophes by reporters was a constant irritation."

In the early years of his retirement, in the 1990s, his irritation at the misuse of the apostrophe grew. Everywhere he went he saw the same mistakes over and over again, until he decided that he could no longer ignore them and, at the age of 78, in 2001, he formed the 'Apostrophe Protection Society' in the hope that he would find half a dozen like-minded people to join him in his cause. At the time he said : "I feel I am a lone voice - although my son agrees with me - but I shall carry on regardless."

Sadly, John has now told us that :
With regret I have to announce that, after some 18 years, I have decided to close the Apostrophe Protection Society.
There are two reasons for this. One is that at 96 I am cutting back on my commitments and the second is that fewer organisations and individuals are now caring about the correct use of the apostrophe in the English Language.
We, and our many supporters worldwide, have done our best but the ignorance and laziness present in modern times have won!
This web site, masterminded by John Hale, will however remain open for a limited time for reference and interest.
John Richards
November 2019

Back in 2001, John, helped by his son Stephen, delivered a polite letter on headed 'Apostrophe Protection Society' notepaper through the door of anyone he found breaking the rules in the town in which he lives, Boston in Lincolnshire. It read :
'Dear Sir or Madam,
Because there seems to be some doubt about the use of the apostrophe we are taking the liberty of drawing your attention to an incorrect use which has been pointed out to us. We would like to emphasise that we do not intend any criticism, but are just reminding you of correct usage should you wish to put right the mistake."

Not everyone took John's intervention in the spirit in which it was intended, although the library agreed to amend its 'CDs' sign. One of the first recipients of John's reminder was a local butcher, whose van has the word 'Carvery's' emblazoned on the side. The owner, said he could not see what all the fuss was about and added : "Sounds to me like this man wants a bleeding job."

Despite this, the Society grew and John recalled : "I didn't find half a dozen people. Instead, within a month of my plaint appearing in a national newspaper, I received over 500 letters of support, not only from all corners of the United Kingdom, but also from America, Australia, France, Sweden, Hong Kong and Canada!

The paper was 'The Telegraph' with an article entitled :
'Greengrocers' grammar sends a purist bananas' and in which he was reported saying : "It is something that has been irritating me for a long time. I walk around town and see so many misplaced or omitted apostrophes it beggars belief. The local fruiterer sells pounds of banana's, the public library, of all places, had a sign saying CD's - even Tesco was promising 1000's of products at reduced prices."

In addition to letter of support, John received several monetary donations to his cause and the New York Times picked up the story, publishing an item headed Boston Journal : 'Minder of Misplaced Apostrophes Scolds a Town.'

In the same year, 2001, John won an 'Ig Nobel Prize' for 'his efforts to protect, promote, and defend the differences between plural and possessive'.

When John harnessed 21st century tech he said : "Now, thanks to John Hale who designed this website for us, I hope that the word will spread even further" and for a number of years it did. The website contained a list of rules on where to place apostrophes, as well as a photo gallery detailing dozens of examples of misuse and all underwritten by John's belief that : "The little apostrophe deserves our protection. It is indeed a threatened species!"

In 2009 John was back in the news again when Birmingham City Council dropped possessive apostrophes from its road and street signs, so that, for example, 'St Paul's Square' became 'St Pauls.' The decision followed years of debate about whether apostrophes should be restored to local place names such as 'Kings Norton', 'Acocks Green' and 'Druids Heath.' He was quoted s saying : “It’s setting a very bad example because teachers all over Birmingham are teaching their children punctuation. Then they see road signs with apostrophes removed.”

The following year an apostrophe on a town centre sign in Hartlepool stating 'Parking Bay's Suspended', erected in the town while gas works are carried out, saw John quoted as saying : "My reaction is mainly bewilderment mixed with irritation." John asked : "What on earth does the apostrophe mean? Plurals never need an apostrophe. The apostrophe obviously still needs protection."

In 2012 the bookstore, Waterstone's dropped its apostrophe and sparked outrage among some of its customers. James Daunt, the Managing Director, who took over the chain in 2011,  following a change of ownership said : “Waterstones without an apostrophe is, in a digital world of URLs and email addresses, a more versatile and practical spelling." When asked John said : "It's just plain wrong."

In 2013 Mid Devon Council moved to abolish apostrophes from street signs to “avoid potential confusion” and a spokesperson said : “If we didn’t have a clear street name and number policy in place it could lead to inappropriate and confusing street names which could also have adverse consequences in times of emergency.” When asked to comment John said : “It is appalling, disgusting and pointless, they have no regard for the English language. Throughout the area, teachers are doing their best to teach children grammar and the children have the right to say ‘why bother?’ when the Council doesn’t use apostrophes.” 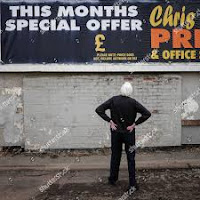 In 2015 he was approached by the ' Dull Men of Great Britain Calendar', an organisation of more than 5,000 members and agreed to star in the new calendar as 'Mr. October.'  John said : “The word ‘dull’ is used only because some people might consider our interests dull or boring. It does not mean we are dull, but just that one aspect of our life might be considered dull by other people.” John was snapped around Boston town ‘looking in horror’ at signs and posters either missing apostrophes or with the apostrophes in the wrong place. In the calendar he rubbed shoulders with a chap who collects traffic cones, another who collects a milk bottles and a man who photographs hedges. John said : “I’ve been very flattered because so many people have emailed me to say that I am not dull. I prefer eccentric. I might sound dull but all I am doing is following a hobby. I think the people who don’t have hobbies are the dull ones.”

John is not done yet and has now said he may start campaigning again , this time to preserve the comma : "The use of the comma is appalling. When I read some newspaper websites they just don't understand what it is used for." 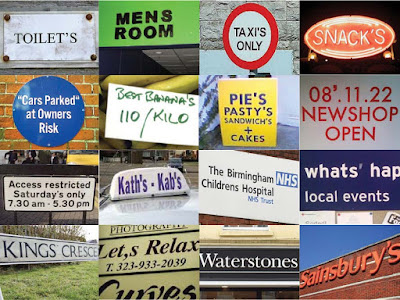