The number of men in prison in Britain over the age of 60 in 2016 had risen to a figure of over 4,000 and they made up almost 5% of the entire prison population. Collectively, this is what they would have resembled :

Prison time is harder to bear for old men than it is for younger, fitter men. Many report bullying, abuse, loneliness and isolation. Because they are quieter and less violent than other inmates, they tend to be forgotten. Yet the consequences of an ageing prison population in Britain is becoming impossible to ignore. With limited resources for rehabilitation and very few suitable hostels in the community, the prison system’s new role as provider of residential care for elderly men is creating a new problem : it’s getting harder to let them out. 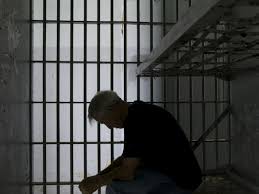 Dave is a 68 year old recidivist. He was born a post- Second World War baby boomer in 1949. He had a hard childhood and left school without learning to read or write.

Dave was 13 when he got his first custodial sentence. It was 1962, the start of the 'Swinging 60s' and he had been caught stealing from cars. Dave could only look at manual labour to make a living but a back injury on a building site in his 20s meant he couldn’t do heavy work.

In 1974, he was arrested for violent disorder. He was 25; one of the lads. It was his first time in an adult prison. Dave said : “Prison was a place for young men. We were all in it together. There were some older prisoners, but not many. And ‘older’ meant someone in their 50s and 60s then. There were no really old men on the wings. Not like now.”

Dave repeatedly fell foul of the law. He thinks he was sentenced 14 or 15 times. He wasn’t always put away and on at least seven occasions, he was given a suspended sentence. Nevertheless, the crimes he committed escalated in seriousness until he was arrested for possession of a firearm with criminal intent when he was 54 in 2003 and was sentenced to life.

He suffered mentally from the heavy realisation that he had wasted his life in prison, an existence he also found physically brutal. He said younger inmates call older men like him "paedophiles." He was beaten up and had his cell set alight and his possessions burnt. Too weak to manage the stairs and unable to get one of the few cells on the ground floor because there were too many frail, old prisoners vying for them, he would spend day after day on his bed, watching TV. The hour allotted for exercise would be used up in the time it took him to get down the stairs to the yard, so he stopped trying.

Dave was released from prison in March this year after serving 14 years of a life sentence. He has no intention of going back. When he reflected on the way prison has changed since he received his first sentence over 50 years ago he said : “My God, prison has changed since my first time. There are loads of prisoners now who are my age and even older. I use walking sticks myself and have bad health, but there were loads of blokes there in a far worse state than me.”

Dave refers to the fact that the prison population is getting older :

* In the last 15 years, the number of prisoners over the age of 60 has tripled.
* The rate of octogenarians serving time has almost doubled in the last two years.
* There are now a dozen inmates in their 90s.
* There’s even one prisoner of 101.

The consequences of this are that :

* There are inmates with dementia who don’t know either why they are in prison, or how they got there.
* Sick and dying old men are taken to hospital in shackles, chained to prison officers.
* Terminally ill prisoners are kept waiting so long for compassionate release that they die in their cells before they get an answer

What has happened in Britain is that a combination of harsh sentencing policies and an ageing population has produced the startling effect that prisons are now one of the largest providers of residential care for frail, elderly men. Prisons have adjusted to this new role in a disorganised fashion, with inadequately trained officers struggling to cope with limited resources in buildings designed to hold healthy young men.

Most British were built in the Victorian era. These buildings have long corridors, lots of stairs, and bathrooms and doorways too narrow to admit wheelchairs, which means disabled inmates need assistance to get from their cell door to their bed. For those who cannot walk without assistance, or who are at risk of falling, taking a shower can be dangerous.

A 75-year-old, called 'Bill' who was released from prison this year has to use a walking frame. He said : “I couldn’t have showers because I was terrified of slipping. There was a step to get into the shower, which I couldn’t manage, but even if I could have, there was nothing to hold on to inside the shower and I’m just not that stable. I ended up not washing for weeks on end. Towards the end of my sentence, I had started to wet myself a bit, too. I told an officer but he just laughed and said it happens to us all as we age, so I often ended up trapped in my cell, dirty and smelly.”

Another prisoner, 67 year old 'George', who served 30 years of a life sentence and also released this year, has, in recent years used a wheelchair. He rarely left his cell and was dependent on friends to help him in and out of the wheelchair, and to bring him food at mealtimes and said : “It was like being buried alive.” Like many of the older prisoners who couldn’t move around freely, he was unable to attend the classes he needed in order to get parole and this, in turn, stretched out his prison stay even further. The important courses are oversubscribed, and the younger prisoners are better at getting signed up because they’re out and about in the prison. George said : “They know who to talk to to get their names on the list. We older prisoners are too timid and keep to our cells too much to elbow our way on to these courses. We just rot away in there.”

One of Dave’s friends in prison had, like him, a bad heart. When the man was dying, he was refused compassionate release. He was judged a security risk, even at the point of death. Prison doctors got a special bed moved into his cell, and his friends were allowed to sit with him and help turn him, or give him water. “He died a few days later,” Dave recalled. “He was past caring where he was, but we all felt it was brutal, dying in your cell. Like an animal. I’ve seen it happen a few times now, and I never got used to it.”

In Russia, the courts will not issue a life sentence to anyone over 60. Spanish prisons release inmates as a matter of course when they reach 80. The state of Louisiana recently passed a law to make it easier for non-violent prisoners over 60 to obtain parole hearings. Britain, by contrast, is a country where more and more old men are locked up, some of them dying. Here punishing cuts to social care for elderly people and to health and education, have meant there is little enthusiasm for spending scarce resources on older prisoners. At the same time, the right wing press is vigilant for any sign of leniency towards men convicted of appalling crimes, whatever the offender’s state of health let alone their age.
Posted by ...............................JohnBoy at 08:13