Published in the 'Journal of Epidemiology and Community Health' by Iain Buchan, Professor in Public Health Informatics at the University of Manchester and his colleagues is a study of population data which tells a Tale of Two Englands.

It showed that once factors, including age, population size and sex were taken into account, in 1965, of the young men and women in England who were between the ages of 25 and 34, those that lived in the North, comprising the North East, North West, Yorkshire and the Humber, East Midlands and West Midlands, 8% more of them died than their counterparts in the South, consisting of the East, South East, South West and London. These were the young men and women born between 1931 and 1940, who had spent their formative years in the Second World War. If they are still alive today, they would be in their late 70s to early 80s and so there would be proportionately less of these old men and women in the North compared to the South.

However, thirty years later, by 1995, the situation had improved for those aged 25-34 and at that time the number of deaths for those in the North was only 2.2% above the those in the South. These young men and women were the Post-Second World War baby boomers who had been born between 1951 and 1960 and grew up in the more affluent late 50's and 60's at a time when both political parties, Labour and Conservative, without question, embraced the Welfare State.

By 2015, the picture was dramatically different and of the 25-34 year olds, 29,3% more of those in the North died compared to their counterparts in the South. They spent their formative years in the last decade of the twentieth century. When this cohort embrace old age in their sixties and seventies in the 2040s - 2050s, those who began their lives in Britain in the North will be much thinner on the ground than those in the South.

In total, since 1965, about 1.2 million more people have died before the age of 75 in the North of England than in the South, taking into account differences in population. 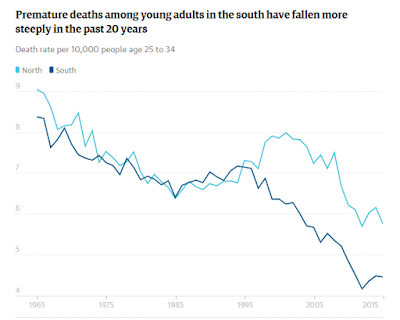 Professor Buchan has said : "A new approach is required, one that must address the economic and social factors that underpin early deaths, especially in younger populations and one that focuses on rebalancing the wider economy to help drive investment in Norther towns and cities."

Richard Wilkinson, co-founder of the 'Equality Trust' and Emeritus Professor of Social Epidemiology at the University of Nottingham, said he was not surprised by the results, pointing out that inequalities rose during the 1980s. He said that austerity was making the North-South divide worse and : “The main cuts are to the cities, the labour areas, which need money most.”

The parents of children in the North today should fear not for their future life chances as the young men and women of tomorrow since a Government spokeswoman has said : “The causes of health inequalities are highly complex but we are taking action by addressing the root social causes, promoting healthier lifestyles and improving the consistency of National Health Services etc. This Government is committed to creating a society where everybody gets the opportunity to make a success of their hard work - regardless of where they are from.”

That should help them sleep easier in their beds.