Britain is no longer a country for and says "Thank you and Farewell" to a fearless, old spitfire pilot called Ken Wilkinson 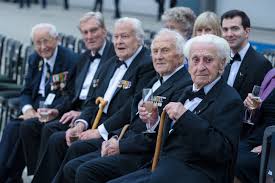 Two years ago he was photographed, glass in hand, at the RAF Northolt celebration for 'Battle of Britain Veterans' alongside the other four survivors. Since then Squadron Leader Tony Pickering, seated next to him, died last year. Only Sergeant Stan Harthill, Wing Commander Paul Farnes and Squadron Leader Geoffrey Wellum survive.

He was born Kenneth Astill Wilkinson in the last summer of the First World War in 1918 in Barrow-in-Furness, Cumbria. His father had served in the Royal Flying Corps in the conflict and after the War Ken recalled : 'My parents moved to Cheltenham (Gloucestershire) when my father got a job at the Gloster Aircraft Company. That’s when I first became interested in planes. Dad would bring me with him to watch aircraft tests at Farnborough, and by the time I left school I wanted to be a pilot.' 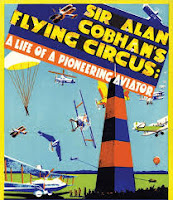 In 1929 Ken started to attend Cheltenham Grammar School for Boys and it was while he was still at school that : 'To test my mettle, though, Dad arranged for me to go up in a Hawker Hartebeest, which is a light bomber aircraft. He told the pilot to spin me around a bit, so he did. But I still loved it, so Dad knew I wasn’t going to give up.'

In fact, it was after his 17th birthday in 1935 that his announced his ambition was to fly in the RAF, but because he was too young to join in Volunteer Reserve and having to wait another 9 months, in the meantime, he recalled he 'had flights in an aircraft of Alan Cobham's Flying Circus, which cost five shillings, but that wasn't really an indication of my suitability, just involving a take-off, straight and level flying and a landing.' 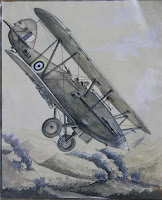 He then flew in a Hawker Hartebeest, a light day bomber and remembered that he was 'in the rear gunner's seat facing backwards. The flight was certainly thrilling- even looking backwards.'

The Royal Air Force Volunteer Reserve in Cheltenham which had been set up in 1936 to supplement the Royal Auxiliary Air Force and provide a reserve of aircrew - pilots, observers and wireless operators in the event of war and in March 1939 Ken was called for an interview and medical at the Cheltenham where he was 'surrounded by big, beefy fellows who positively exuded fitness - whilst I had been out dancing the previous night ! Strangely, I passed, they didn't.' He was now officially an 'Airman (under/training) Pilot.' The very next morning he then went to Staverton Airfield and made himself 'known to the instructors and had my first flight in a Tiger Moth thus properly starting my flying career.' 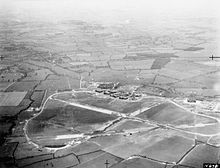 After successfully applying for the vacancy for a couple of weeks full-time training, he gave up his job in Cheltenham and as a result 'went solo fairly quickly.' He now got another job with the test flight department at Rotol at Staverton working for the test pilot. At the time had intended to become a curate and work in the RAF for 4-6 years to raise money to study in theological college having married his sweetheart. In the event she ditched him for 'a chap who worked on Cheltenham Council' which meant he ditched the idea of joining the Church and could concentrate on flying training and ground school. He was now 21 years old and 'got quite a few hours flying time, including odd things like ferrying new aircraft to RAF aerodromes- where the sight of a pilot in 'civvies' was rare.' 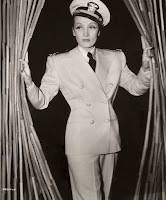 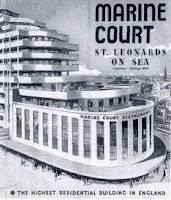 After the outbreak of the Second War in September 1939 and during the lull, which became known as 'The Phoney War' he went to the Initial Training Wing on the sea front at Hastings he declared 'my RAF career had finally began.' He stayed with the other recruits in requisitioned luxury flats on the sea front at Marine Court where they 'were treated very well and a lot of famous people came to see us' and included Light Weight boxing champion Len Harvey, Billy Bishop, a Canadian VC and Great War fighter pilot and were entertained by movie star Marlene Dietrich. All this indicated the awareness of the sacrifice these young men would be required to make.

Ken himself said : "On 1st September '39 I wrote myself off. I thought 'you've got no chance of lasting through whatever it's going to be' because it was quite obvious that the Germans were moving. They were going to make a hell of a war out of it. So I was ready for War."

In March 1940 Ken, who was now married to Josephine, was moved to Haworth and was flying again, but because he hadn't passed his ground exams, had to start flying training all over again and said : 'It was not an auspicious start.' He was posted, with other recruits, to Montrose in Scotland for 'advanced flying training' in June 1940 and they stopped overnight at King's Cross Station. He recalled : 'Until then the War had been something we read about in the papers, but at King's Cross we had to stand aside and give priority to soldiers returning from Dunkirk. Seeing their expressions and the state of their uniforms showed us just what war entailed. It was a necessary experience for us.'

With his training complete, Ken joined the tail-end of the Battle of Britain as a Spitfire fighter pilot in the Autumn of 1940. He was 22 years old. "I was assigned to 616 and 19 Squadrons in East Anglia, where our job was to protect the industrial Midlands and north from the German bombers. I didn’t carry any lucky charms, but I did wear a pair of my wife’s knickers around my neck."

After reporting to No 19 Squadron RAF on October 1940 at RAF Fowlmere and calling himself "the odds-and-sods bloke" Ken befriended Sgt Bernard J "Jimmy" Jennings, with whom he practised formation flying and aerial combat. The 'Duxford Wing' Ken had joined had been in existence for several weeks before his arrival and he considered its creation to have been calculated to have had a psychological effect on an enemy who had been led to believe the RAF were almost finished.

He was now under the command of the legendary RAF ace, Douglas Bader, who had lost both legs in a crash and recalled : ''He was a leader. I was very junior at the time, so apart from gawping a little bit and calling him 'Sir', naturally I didn't speak to him much. Even with my own legs I couldn't fly like him." 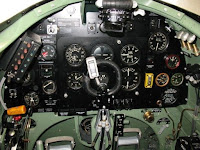 Ken was in absolute admiration of the Spitfire. When, for example, he compared its throttle to a training aircraft he said : "You just push the ting forward and you've got all the power you've never had before. Oh Boy. Tremendous. And of course you get into the sky and you do what you've been taught to do : turn left and go round the aerodrome and then start climbing, then you realise what a lady you're flying. Oh, wonderful aircraft. Very, very responsive to all the controls."
https://www.youtube.com/watch?v=pYqfXOyKnQY&t=0m14s

It was now that Ken got his first taste of war.  "Every day we were up at 4am to wait for our flight commander to tell us that German planes were on their way. We would then run like hell to our planes." Ken said that the first time he saw a large flight of German aircraft heading towards him it did put a lump in his throat. It also made him think: "what on earth are we going to about that lot?"

As a Spitfire pilot his job was to keep the German fighters occupied while the 3 squadrons of Hurricanes below attacked the bombers. He later said : "If you kept the German fighters up above the Hurricanes, we were doing a good job and of course if you could on the way manage to shoot some Germans down, so much the better." and "You're driving a single seater aircraft, there's nobody to help you to do anything. You still remember the first time you see that enormous gaggle of bombers and the fighters over it as you're coming down south. There was an almighty lot of them.You think to yourself, 'Mother, you didn't prepare me for this'. But you get stuck into them because you've got to. That's what you're there for. I think being aware that you might get the chop, that was part of it, really."

Ken had no doubt the justice of the cause and said that he could not allow the "untidy creatures" coming from the other side of the Channel to attack "his country." He later reflected : "Animosity, that was great. That's an interesting thing because in the early days, at Squadron 19, we had voice-operated microphones. When you're in combat what are you doing ? You're doing yourself up and to do yourself up you use the filthiest words you can and so you'd be flying in an describing the German pilot and his lack of decent parentage and his lack of anything decent at all and all that was happening was the WAAFs, dear little souls in the ops room, were hearing were hearing all these words and so the voice operated microphone was stopped."
https://www.youtube.com/watch?v=4P8uFPLsdRM&t=0m05s

"I was one of the lucky ones. I saw friends fall out of the sky, aircraft go up in flames... terrible things. I’m not sure younger generations really appreciate how close we came to being a suburb of Berlin”

"You had to get into an attitude and to make sure that, basically, you're as cold as a fish and once somebody has failed to return, that's it. Dame Fortune smiled on me and not on some of the others.
"I can only say that whoever it was that pooped off at me wasn't a very good marksman."
https://www.youtube.com/watch?v=OK0cw048iRg&t=0m07s

By 1945, after six years of duty as a pilot Ken recalled : "I was doing a very, very humdrum job. I was flying Hurricanes in a bomber operational training unit and the idea was to give the bomber crews experience of being attacked" and "was listening to the BBC and the news came on that the War was over-VE and so I did a great big barrel roll around the Wellington bomber, landed back at Honeybourne, got a lift into Cheltenham where my wife and daughter were and went to the nearest boozer that was selling beer and had a few and so did my wife and a funny thing about is : we had that beer that night, because it was VE Night and it was the daughter that had the hiccups."
https://www.youtube.com/watch?v=EhcMSs40xTQ

Ken was released as a Flying Officer from the RAF in November 1945, but continued to serve in the RAFVR from 1947. After a War in which Ken had devoted himself whole-heartedly to the destruction of the enemy, Ken became a quantity surveyor whose purpose was construction and 'settled down to normality.' One of his projects was the rebuiding of Birmingham New Street Station in the 1960s,

Ken was well aware of his role in History : "After us, there was nothing. Just think; it was three thousand or so fighter pilots over the total period. And that was it. We just had to carry on and carry on, you see. Had we failed and the Germans succeeded, then the state of Britain would be very powerless indeed. We would have carried on, carried on all the way as long as we had aeroplanes and materials."


"I miss the many friends I’ve lost, including the ones that never came home in the summer of 1940. None of us should ever forget them." 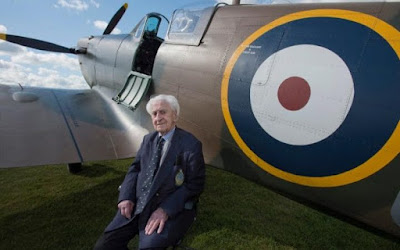