Despite the fact that Colin was one of the world’s leading scholars of 'political communications and mass media', who has made useful contributions to the subject since the 1960s, his passing, at the age of 78, has gone largely unreported and without tribute. No mention in the national press, no obituary in the Times, Telegraph or Guardian newspapers; only a brief tribute from the Judd School in Kent where Colin had served as Chair to the Board of Governors until 2007 under the title of 'Judd remembers an extra-ordinary man' and another at his old Department of Politics and International Relations at the University of Kent. In addition, Colin's passing generated just two tweets on twitter.

Colin was born in November 1938 in the 'Surrey North Eastern Registration District' which had been created that year out of the districts of Kingston and Richmond that year and between the ages of 14 and 19 was packed off  as a boarder at the prestigious public school for boys, Tonbridge School, of Tudor foundation with its motto : 'Deus Dat Incrementum' 'God Giveth the Increase.' Having left school at the age of 19 he took up his place as an undergraduate at Oxford from which he graduated with his BA in 1961 and, in succession, began his academic career with an MA at Carlton University, in Ontario, Canada followed in 1962, by his DPhil back at Oxford in 1965.

Having married Virginia Crowe, whose grandfather was Sir Eyre Crowe, a British diplomat and leading expert on Germany in the Foreign Office, best known for his 1907, vigorous warning that Germany's expansionist intentions toward Britain were hostile and had to be met with a closer alliance with France. Colin started his first job as a young lecturer of 27 at the new University of Kent in 1965.

When he joined the 'School of Politics and International Relations' at its foundation and started the first undergraduate course in Britain on 'Politics and Mass Media' , his daughter with Virginia, Kirsty, who would later go on the write 'Dog @ Home', was the first baby born to the staff after the University opened and her brother Bruce followed three years later in 1968. In addition to his work in the Department, he was also Dean of Eliot College Eliot College and then  Rutherford College the following year. 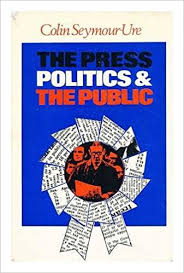 Colin had his first publication in 1968 with 'The Press, Politics and the Public' and after a brief sojourn as 'Visiting Professor' at the University of North Carolina Chapel Hill in 1970 he returned to Kent and in 1973, was instrumental, along with colleague, Dr Graham Thomas, a Lecturer in the University’s Department of Politics, in creating the Universities unique archive of 90,000 political cartoon which started life as the 'Centre for the Study of Cartoons and Caricature' and later became 'The British Cartoon Archive,' the national collection of political and social-comment cartoons from British newspapers and magazines.

Steve Bell, political cartoonist, talked about the archive in 2008  : https://www.youtube.com/watch?v=yusbR6jH1h0

Initially, Graham had contacted national newspapers in an effort to locate surviving collections of cartoons and had found them eager to dispose of the material they held. The collection is housed in Templeman Library with a public exhibit gallery. It now has 130,000 original drawings by 350 different cartoonists and 90,000 cuttings and a library of books and magazines with a website which gives free access to its holdings, including a fully searchable catalogue of 140,000 cartoon images.

In 1974, at the age of 36, he published 'The Political Impact of Mass Media' and eight years later in 1982, in what now, 25 years later, seems to be a work of great prescience, 'The American President : Power and Communication.' Colin examined the relationship between presidential power and presidential public communication. He suggested that a Prime Minister had weapons at his or her disposal that reduced the weight that public relations needed to bear. A President, by contrast, must rely heavily upon communication to achieve his goals - a dependence which is clear, but the outcome of which is unpredictable. 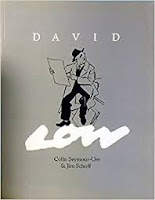 In 1980 he started his 22 year tenure at Kent as Professor, School of Politics and International Relations and five years later published his well-regarded biography of the cartoonist David Low who, in a career which spanned 50 years in the middle of the 20th century, published over 14,000 drawings and had his work syndicated around the world to more than 200 newspapers and magazines. Colin appreciated his skill in capturing the spirit of his time was undisputed. Politicians courted or damned him, Hitler and Mussolini banned him, but nobody could ignore this brilliant pictorial journalist who drew his leading articles instead of writing them and influenced a whole generation of cartoonists on both sides of the Atlantic. 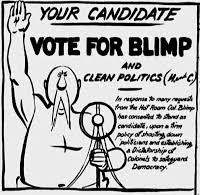 Such characters as the immortal Colonel Blimp and the TUC Carthorse are stamped on the nation's consciousness. Colin's book was a tribute to the critical but constructive spirit a cartoonist of genius who liked to call himself  "a nuisance dedicated to sanity". Colin noted that : ‘Low’s cartoons looked the stronger for being in Beaverbrook’s paper, and Beaverbrook could use Low to symbolise his own detachment, as newspaperman, from party ties and trammels.’

In 1991 came 'British Press and Broadcasting Since 1945', in which he covered the period from a time when the phrase "mass media" was barely used, to the era of international media conglomerates and global communications. Colin covered the size and ownership of the national and provincial press, the growth of television and the impact of ITV, the decline and revival of radio and the continuities and differences in what people read, looked at, listened to and liked.

In 1992 we have a brief glimpse of Colin talking about the ebbing of support for John Major's Conservative Government : http://www.gettyimages.co.uk/detail/video/major-and-the-press-int-kent-maidstone-cms-prof-colin-news-footage/810228004

In 1997 in 'Parliamentary Affairs' he wrote 'Editorial Opinion in the National Press' : 'Never before has Labour enjoyed the majority support on  the national press in a general election. Six out of ten national dailies gave the party their largely unqualified support. This was twice the previous highest number. Five out of nine Sunday papers, too, endorsed Labour. In the political history of the press, this was an historic moment, every bit as significant as the size of labour's majority, which sent commentators groping to the early nineteenth century.'

In 2003 came 'Prime Ministers and the Media: Issues of Power and Control.' He examined the ways in which prime ministers manage and fail to manage their public communication and covered political rumours, political cartoons and capital cities. He set  contemporary analysis of Downing Street press secretaries, media barons and press conferences in historical context and on public records, private papers and Colin's interviews  dating back to the 1960s. Two of his middle chapters were entitled 'Harlots Revisited: Media Barons, Politics and Prime Ministers' and 'The Downing Street Press Secretary: Getting into a Spin?' Two of the later ones were : 'Grapevine Politics: Political Rumours' and 'Drawing Blood? Prime Ministers and Political Cartoons.'

In 2009 he wrote his article 'A  More Accountable Press'  in 'The Political Quarterly' in which he stated : 'This independent report for the Media Standards Trust makes the case for urgent reform of the self-regulation of British press content. It focuses on increasing inaccuracy and invasion of privacy by the press, which also suffers declining public trust. These features are linked to major changes in press technology and economics. Unlike comparable trades and professions, the Press Complaints Commission has not updated its structure and procedures to reflect modern standards of transparency, fairness and accountability. The democratic role of the press is weakened. Governments may be tempted to intervene. A later report will propose reforms.'

Colin's reach extended far beyond the confines of the University of Kent where he was Emeritus Professor of Government from 2002 and he was by turns a Council member of the Hansard Society; for six years Chair of the Independent Television Commission’s 'Committee responsible for advising on advertising rules' ; Master of the Skinners' Company; Chairman of the Study of Parliament Group, made up of parliamentary staff and academics and had worked at Harvard and in Washington, Australia and Canada. 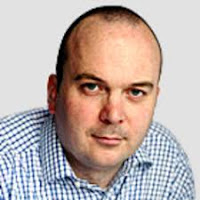 Philip Cowley, a Professor of Politics at Queen Mary University of London in the School of Politics and International Relations said of Colin :


'He was old school - dapper, drove a sports car, the nearest thing I've ever met in academia to Terry Thomas - but wonderful company, always very kind to me, and always worth reading.'

Labels: No "Farewell" to Colin Seymour-Ure