The 'amendment' Alf refers to in his tweet today, is one of the five the House of Lords made to Boris Johnson’s Brexit Bill, pioneered by Alf and the one that would have restored the right of unaccompanied child refugees to be reunited with their families in the Britain. This means that the Bill will become a law when, within a few days, it gains Royal Assent. On passing the Bill, Prime Minister Johnson, feeling very pleased with himself, made a brief comment calling for an end to “rancour and division” and "at times it felt like we would never cross the Brexit finish line, but we’ve done it.”

Alf's amendment, passed in the Lords on Tuesday, was rejected in the Commons by the votes of the 342 men and women who are Conservative Party Members of Parliament who represent the interests of all the citizens who live within the boundaries of their parliamentary constituencies. One of them was my own MP, Rehman Chishti, who considered it to be in my best interest that unaccompanied child refugees stranded in Europe should be denied the right to join their relatives in this country.

Forty-one year old Mr Chishti, full name Atta-ur-Rehman Chishti, was once, himself, a child immigrant. Born in Muzaffarabad in Kashmir, Pakistan, his father Abdul Rehman Chishti had been  appointed 'Federal Adviser on Religious Affairs' to Zulfikar Ali Bhutto, Prime Minister of Pakistan, two years before young Rehman was born. In the year before he was born, Bhutto was overthrown by a military coup by General Zia-ul-Haq and would be executed two years later. Rehman's father left Pakistan for Britain in the year he was born and began a new life here as an imam. He did not see his father until he was 6 years old, when he came to settle in Britain in 1984.

Mr Chishti clearly knows what it is like to be separated from a parent, yet he still voted with his 343 colleagues to deny child refugees stranded in Europe the right to join their relatives in this country. A month ago, during the election campaign, he, like them, had backed the Conservative Party Manifesto which, on page 23, had pledged that : 'We will continue to grant asylum and support to refugees fleeing persecution, with the ultimate aim of helping them to return home if it is safe to do so.'

It is difficult not to agree with Stuart McDonald, the SNP’s Immigration Spokesperson, who said: “Rather than stepping up and playing its role in addressing the refugee crisis, the toxic Tory Government has instead lurched to the extremes and closed the door on some of the most vulnerable children in the world.”

Lord Dubs finds the Government's action 'bitterly disappointing' because 81 years ago, in 1939, he himself, was one of the 699 child refugees brought out of Prague by the individual action of the stockbroker and humanitarian, Nicholas Winton, prior to the Nazi invasion of Czechoslovakia. Alf has told the House of Lords in a debate : "It is thanks to Sir Nicky Winton, who helped to organise Kindertransports from Czechoslovakia, that I got here at all. I almost certainly owe my life to him."

The year before Alf came to Britain, when he was 5 years old, representatives from 32 western states had gathered in the resort town of Evian in Southern France to discuss whether to admit a growing number of Jewish refugees, fleeing from persecution in Nazi Germany and Austria. Lord Winterton, representing Neville Chamberlain's Conservative Government, like most of the other representatives of their countries, decided to do nothing.

That same year, with the German invasion of his country, Czechoslovakia, Alf's father disappeared.
He recalled : "My mother said "he's gone away" and a year later he remembered his mother : "put me on the train. I can still see in front of me Prague Station and my mother standing there and looking anxious. It was about midnight. A German soldier with a swastika standing there."

After a two day rail journey, which he remembered because :

"My mother gave me a little rucksack of food and I didn't eat anything for 2 days, so I must have been traumatised."  He arrived at at Liverpool Street Station and was reunited with his father. He reflected : "I was very lucky because most of the Kindertransport children said "Goodbye" to their parents in Prague and never saw them again."  At first his mother was refused permission to leave Prague, a cause of great anxiety, but eventually got an exit visa and joined them in Britain.

Alf's interest in politics sprang from his experience as a refugee "When I was about 12 or 13, or even perhaps, younger I began wondering : 'why what had happened to me and the world ?' and I said to myself  : "if evil politicians can do so many terrible things maybe politics could also be a way of changing that." In other words if politics has the power to make things worse for people, it could also have the power to make things better for people." So I got passionately interested in politics."

After attending university he : "joined the Labour Party. I became a local councillor and the I stood for Parliament and the first time I didn't and then I got elected to Parliament and then I lost in one election and then I was head of the Refugee Council. It was quite odd, somebody who was a refugee to actually become the Head of the Refugee Council, although the refugees at that point, this was later, were mostly from other countries, not European and then I was put in the House of Lords, where I still am." 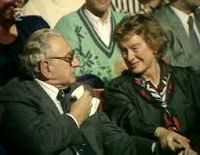 He confessed : "I didn't know for years about Nicholas Winton. I knew I'd come on a Kindertransport and then only 15-20 years ago the news got out and I met him several times." The occasion had been when Nicholas made an appearance on Esther Rantzen's BBC tv programme,  'That's Life', in 1988 and asked "whether any in the audience owed their lives to him ? and, if so, to stand", at which point more than two dozen people, including Alf, rose and applauded and because the programme was aired nationwide, many other rescued children wrote to and thanked him.
https://www.youtube.com/watch?v=6_nFuJAF5F0

Sadly, no tv programme will now be made about Alf, where those present are asked : "whether any in the audience owed their reunification with their families to him ? and, if so to stand."