Britain’s old men with dementia “Fear Not.” Thailand will give you affordable, quality care

There are an estimated 850,000 old men and women living with dementia in Britain. Local authority residential care costs up to £700 a week, with private care around £1,000. In England, if their assets are above the upper threshold of £23,250, they are liable to pay all their care home fees. By the time their capital is reduced to £14,250, their local authority will pay some of their care home fees and once they drop below this, their income will be used to pay for their care, provided they are left with a minimum amount, known as a ‘personal expenses allowance'.

If they have an asset that they transfer to someone else to avoid it being used to pay for their care, this is 'a deliberate deprivation of assets' and the local authority can assess them as if they still own the asset. Examples of this are : transferring money into someone else’s bank account, or transferring ownership of a property into someone else’s name. If they own your own home, this may be included in the financial assessment to determine who pays their care home fees.

Where the value of their home is included in a financial assessment, it is not be taken into account for the first 12 weeks of them living in the care home. This is called the ‘12-week property disregard’. This may mean that, during this time, the local authority will pay or contribute towards the fees and this 'grace period' can enable the family to arrange to sell the home, or speak to the local authority about other options. If, however, the home is not sold after 12 weeks, the local authority can continue to pay their care home and will claim back the money it has paid in care fees once the home is sold.

In these circumstances, it is not surprising that some British families have taken elderly relatives with dementia, overseas, to countries where the care is relatively cheaper and the quality of care better than in Britain. There are no prescribed staff-to-guest ratios in Britain but, with annual staff turnover exceeding 30% and 122,000 job vacancies, levels in state and private facilities tend to be around 1: 6. In Thailand, in contrast, 1:1 around-the-clock residential care with fully-qualified staff – in award-winning facilities that look like four-star hotels – costs around £750 a week.

The number of old men and women from Britain in care homes in Thailand is a small, but growing. Dr Caleb Johnston, a Senior Lecturer in Human Geography at Newcastle University said : “Thailand already has a long history of medical tourism and it’s now setting itself up as an international hub for dementia care.”

He spent nine weeks in Thailand along with Prof Geraldine Pratt, Head of Geography at the University of British Columbia, interviewing families and staff in residential care homes. In Chiang Mai have they found eight homes with 'guests' from Britain. Some of them are British-run; some are Thai-run but with substantial investment from Britain and some are Swiss-run and all have the backing and support of the Thai government. Dr Johnson said : “The government and private investors are very active in cultivating this as part of their economic development.” 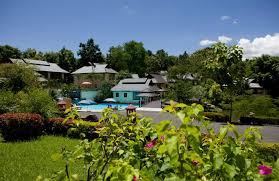 Dr Johnson : “Relative to the total number of people living with dementia, it is a low number. But with the number of people with dementia set to increase, and the cost of looking after them also getting higher, it is likely to be an option that more and more people consider.” This means that an increasing number of old men and women with dementia are being cared for in care homes abroad, living thousands of miles away from their families, because suitable care in Britain was either impossible to find or afford.

Paul Edwards, the Director of Clinical Services at Dementia UK, said : “I can well understand people choosing this option, given the state of anxiety about care in the UK. It’s an emerging market that I can see becoming more popular because our failing and ailing system – which no politician is even trying to find a solution for – causes fear for those whose loved ones have to use it.”

Nonetheless, those who take their loved ones abroad talk of the distress in having to choose between the physical, emotional and financial hardships of caring for them in Britain and outsourcing their care to the other side of the world. Mrs .... is one of those who had to make this choice when she moved her husband into Vivobene Village, a Swiss-run home near Chiang Mai. 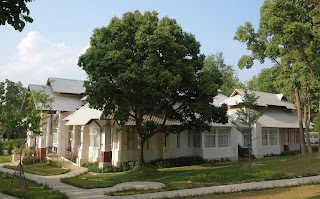 Initially she tried finding care close to her home in the South of England, but was forced to move to Yorkshire and then to the North of England. She recalled : "The home we were recommended for my husband cost £900 a week and one afternoon, my son-in-law went to take my husband out and he wasn’t dressed or shaved. He was just looking out of the window. We bought him home and a few months later, I put him into another care home and the same thing happened again.”

Shortly afterwards, the couple flew out to see their daughter in Bangkok and heard about the care home. “He’s never left here since that day. We just said, ‘this is perfect’.”  Mrs ... now visits her husband three times a year, staying for two to three months at a time. “I think he’s very happy here,” she said. “The people around him are so nice and he reacts to that. For him, I think his life is as good as it could be. It’s worse for me than it is for him.” 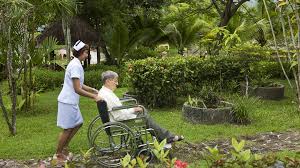