Scotland is a country with islands called the Shetlands, where past Guizer Jarls look down and remember their own 'Up Helly Aa' 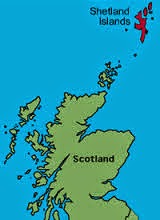 The Shetland town of Lerwick's 'Up Helly Aa,' January celebrations, held over the 51 years since 1958, have been presided over, in turn, by 51 Jarls, twenty of whom have passed away.

The latest was John Hunter, who sadly died last year and was 'Johan Sanderrevet of Valsgärde' in his galley 'Jägare' ('Hunter') in 2011. Johnan was born in 840 in the kommune of Valsgärde, Sweden and was famed for his voyages in 'Jägare', the most memorable of which became a famous Swedish saga. 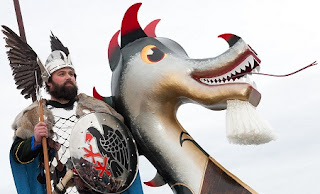 Wherever they are, in their Heaven or in the hall of Valhalla, in Asgard, ruled over by the god Odin, the old Jarls will remember that last Tuesday in January, when, on the stroke of 7.30pm, a signal rocket burst over the Town Hall, the torches were lit, the band struck up and the amazing, blazing procession began, snaking half a mile astern of them, the 'Guizer Jarl', standing proudly at the helm of their doomed replica longship, or 'galley'.


"Floats the ravan banner o'er us,
Round our Dragon Ship we stand,
Voices joined in gladsome chorus,
Raised aloft the flaming brand."

It took half an hour for their squad of Vikings to drag them to the burning site, through a crowds of 5,000 spectators or more. Then, the guizers circled the dragon ship in a slow-motion, catherine wheel of fire and sang the traditional 'Up Helly Aa' song.


"From grand old Viking centuries Up-Helly-A' has come,
Then light the torch and form the march, and sound the rolling drum:
And wake the mighty memories of heroes that are dumb;
The waves are rolling on."

Another rocket exploded overhead and they left their ship, to a crescendo of cheers. A bugle call sounded and the torches were hurled into his galley and as the inferno destroyed four months of painstaking work by the galley builders, the crowd sang 'The Norseman's Home' - a stirring requiem that brought tears to the eyes of the hardiest Viking.

Mirth followed, as the night rolled on and more than 40 squads of guizers visited a dozen halls in rotation, where each squad performed its 'act', perhaps a skit on local events, a dance display in spectacular costume and all accompanied with another dram, soaked up with vast quantities of mutton soup and bannocks.

This year's Guizer Jarl, Liam Summers, follows in the footsteps of other departed Jarls, one of whom was Jack Scott, who took the character of 'King Magnus Barelegs' in 1959 in his galley 'Hok' ( 'Hawk') and was captured on film by Pathé News.

He was joined in the Hereafter by Willie Tait (left) who was 'Olaf the Saint' in 'Visund' in 1960 and James Young James who was 'Harald Hardrada's Vaerings' in  in 1961.

Willie continued to contribute to Up-Helly-Aa by making torches for the procession, was known as 'Feejur' and referred to as 'Indestructable' and in in January 2014, was photographed getting his.hands on the coveted shield and axe of Guizer Jarl, Ivor Cluness. 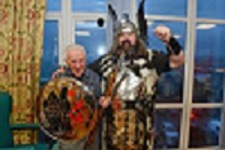 When Willie passed over, he joined the company of G. Leask who was 'Olaf Kyrre' in 1962 and G.Paton as 'Sigurd the Crusader' in 'Jorsalfarer' (Crusader) who was Jarl in the harsh winter of 1963.

These old Jarls were chosen following the tradition of choosing a 'Guizer Jarl' or 'Chief Guizer', who was the leader of the Jarl Squad who were the 'Vikings For the Day.' It dated from the time when they were first elected by their fellow guizers (disguisers), back in 1882 and were given the title of 'Worthy Chief Guizer.' By 1906 their importance was such, that it was decided to buy them, for their use, a Viking suit of armour and the other trappings of the chief and to call them from then on, the 'Guizer Jarl.'

At first : “He wore a silver helmet, with raven’s wings rising high on either side, a corselet with sleeves of silver mail was worn over a jerkin, fastened round the neck and hung loosely from the shoulders. On the legs were thigh length black stockings and on the feet were rawhide sandals fastened with tan leather thongs which criss-crossed over the instep and all the way up the thighs. He carried a round silver shield on which was engraved a raven, a large silver-headed battle axe and dagger hung from his belt.

In 1931 improvements were made to the outfit and each year the suit of armour with helmet, breastplate, shield, axe, dagger and belt were passed down to the next Jarl who, in turn, chose his own design for his 'kirtle', his medieval tunic, in colours that both contrasted and highlighted them from their squad.

Willie also joined J.Hunter who was 'King Harald Graafeld' in 1964 and Tom Moncrieff who was 'Ottar the Explorer' in 'Loki' (wily trickster god of Norse mythology) in 1965.

Joe Hunter was 'Haakon the Good' in 'Feeyarsund Belphegor' (Demon of Freys Sund) in 1966 and Thomas Simpson was 'Halfdan the Black' in 'Viggyrdil' (War Girdle) in 1968.
Harald Graafeld or 'Greycloak', who died in 970, was King of Norway and Ottar the Explorer
was Ohthere of Hålogaland, a Viking Norwegian seafarer known only from an account of his travels that he gave to King Alfred of the Anglo-Saxon kingdom of Wessex in about 890. Haakon was the King of Norway from 934 to 961 and was noted for his attempts to introduce Christianity into his kingdom, whereas Halfdan was a ninth-century King of Vestfold and was the father of 'Harald Fairhair', the first King of Norway.

Willie also joined William Peterson who was 'Einar Thambarskelver' in 'Ormrinn Langi' (the Long Serpent) in 1970 and Allan Anderson who was 'Tore the Hound' in 'Ulvin' (The Wolf) in 1971.

In 1034 Einar Thambarskelver and several other Jarls went to Russia to invite Magnus, King Olaf's only son to return with them and become the King of Norway and was immortalised by the American poet Longfellow :


'It was Einar Tamberskelver
Stood beside the mast;
From his yew-bow, tipped with silver,
Flew the arrows fast.'

Tore Hund was one of the leaders of the Stiklestad peasants who opposed King Olaf II of Norway, later named 'St. Olaf'' who was reported to have been among the chieftains who killed the King in the Battle of Stiklestad in 1030 and Kali Kolson of Orkney was born in the year 1098, son of Kol Kalison Earl of Caithness.

Kali Kolsson, Jarl of all Orkney and Caithness was born 1100. 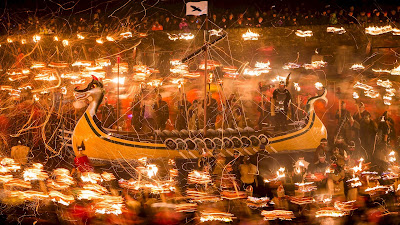