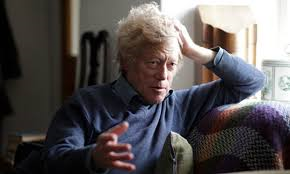 Roger, who has died at the age of 75. was a philosopher who specialised in aesthetics and had written more than 50 books and still liked to dance, but did confess, four years ago : “At my age, it rather depends on my knees. If there’s a local reeling party, I might go to that.”

In his 'Confessions of a Heretic,' a collection of essays  published in 2016, Roger took issue with the dancing witnessed in the nation’s clubs and pubs, in which participants “jerk on to the floor in obedience to the puppet master at the desk”.

In his essay, 'Dancing Properly', he commented that dancers today 'are dancing at each other. The difference between ‘at’ and ‘with’ is one of the deepest psychological differences we know. It is exemplified in all our encounters with other people – notably in conversation and in sexual gambits … The decay of manners that we have seen in recent times is to a large extent a result of the loss of withness and the rise of atness in its stead. Rudeness, obscenity, the ‘in your face’ manners of the new TV presenter – all these are ways of being ‘at’ other people. Courtesy, manners, negotiation and deference are, by contrast, ways of being with.'
It is hard to fault this analysis and post Second World War baby boomers in Britain, born either before, or just after the middle of the last century, would recognise the 'withness' society into which they were born, diminished over the years, to the extent they find themselves at odds with young people across the whole spectrum of social interchange in 'atness' Britain. 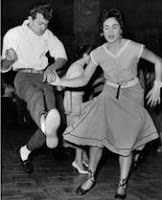 Although he confessed that he was “no good at it”, Roger still loved dancing and he looked back nostalgically to the tactile dances of his youth in the early 1960s where "physical contact was permitted in a way that it wasn’t in everyday life. The electricity of physical contact has gone therefore from young people’s lives. For us ageds, I can remember the tingle in your fingertips when you touched a girl’s body anywhere. That’s part of it, but also that touching as a courtesy has gone." It had been replaced by the solitary nature of much modern dancing.

A little conservative in his dancing tastes : "I love Viennese waltzes and polkas, and especially cèilidhs and old-fashioned formation dancing,” Roger also admitted that :“I like rock’n’roll too." In the early days of rock, he claims, dance steps required a partner, and this allowed couples to “touch, swing around each other, move together in an attempt to recapture withness”.
http://www.britishpathe.com/video/this-is-real-rock-nroll/query/Oak 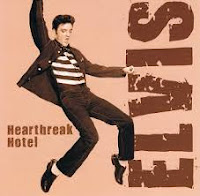 Roger believed a good example of music to dance “properly” to, would be Elvis Presley’s 'Heartbreak Hotel', in which the rhythm is generated by the melodic line and the voice: “There is no violent drumming, no amplified bass, none of the devices which – I am tempted to say – substitute for rhythm in so much contemporary pop. This withness is felt by the listener as an urge to dance, an urge to look around for the person whose hand could be taken and who could be led on to the floor.”
https://www.youtube.com/watch?v=iUpd6D6IdTs

Roger also believed that this was so 'with the pop music in the days immediately following rock ’n’ roll – music like that of the Beatles, Pink Floyd, the Grateful Dead and a hundred others, which is now widely listened to, but rarely danced to, precisely because it contains a memory of real dancing. Its very melodiousness ensures that it will be banished from the disk jockey’s computer table, and replaced by a grotesque caricature of music in which rhythm is replaced by beat and melody by senseless repetition.'

The philosophical arguments underpinning Roger's thesis about dancing can be found in his earlier essay :