Britain is a country where young industrial workers who are now old, were caught in aspic by a photographer called Maurice Broomfield 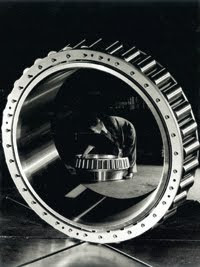 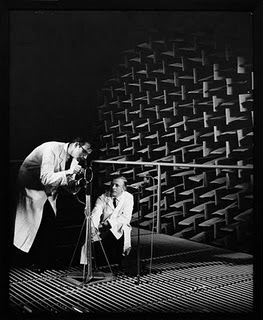 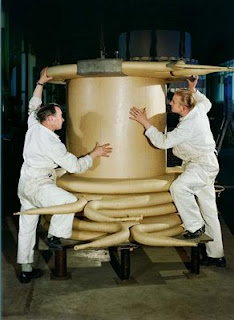 While Bert Hardy was the British photographer of street life in the 1940's and 50's, Maurice Broomfield was the photographer of the factories in the 1950's and 60's. He was interveiwed on the 'Today' radio programme earlier this week. He is 94.

What is interesting about Maurice is that he :

* Was son of a lace-maker and started as a lathe operator at the local Rolls-Royce plant. This didn’t please his mother : “She wanted me to be a nicely clothed worker, not a chap who had to take off dirty overalls before I was allowed in the house. They were covered with this terrible mixture of whale oil and disinfectant that got everywhere.”

* Later said that : " There was a human relationship between the man and his product. They’d clean up the machinery and make things look nice with the same pride they took at home. And they’d dress nicely, too. It wasn’t unusual to see a chap in a suit and trilby hat or a girl with red shoes and scarf."

* Would wander the factory, drawing: “I loved the noise, the movement. I remember sitting on the loo seat, making sketches on a piece of lavatory paper.”

* During the War, drove a Quaker ambulance.

* After the War,began taking photos, and became an industrial photographer who had been inspired by painters : Joseph Wright and Johannes Vermeer.

* Worked for ICI before travelling the world photographing for Hawker Siddeley a company making a spectrum from transformers to aircraft.

* Was in the 1950s, a newspaper photographer and said : "I was fortunate: Lord Drogheda had a great interest in the arts. He said he liked the way I regarded industry as a stage set. And he was right, I did see it as magical; that’s why my lighting became quite theatrical."

* His photos to be shown a in two exhibitions this Spring and Summer reveal not just, that defunct world of looms, laboratories, car factories and cooling towers, but also,something of the excitement of being part of Post Second World War British industry.