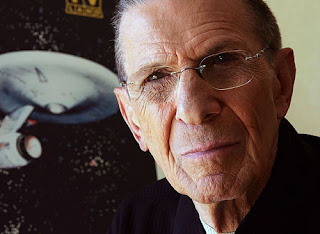 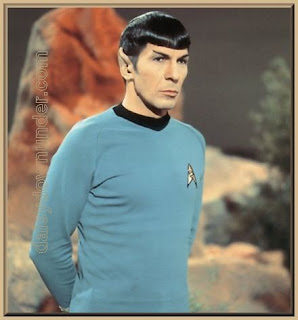 Leonard Nimoy is 79 today. For millions who remember the t.v. series from the 1960's and 70's and the movie spin offs, he will always be frozen in time as 'Mr Spock'.
Here are some things you probably didn't know about him, that he :
* was born in Boston, Massachusetts, to Yiddish-speaking Orthodox, Jewish immigrants from the Russia. His father owned a barbershop.

* started acting at the age of eight and had his first big role at 17.

* studied photography at the University of California, got his degree and has an MA in Education and an honorary doctorate from Antioch University.

* spent most of his early acting career playing small parts in B movies, TV shows such as 'Dragnet', and serials such as ' Zombies of the Stratosphere'and played an Army sergeant in the 1954 Sci Fi thriller, 'THEM!'

* was the half-Vulcan, half-human Spock in the 'Star Trek' series which ran from 1966 to 1969 and earned 3 Emmy acting nominations for his work.

* started film directing in 1984 with the third 'Star Trek' movie. When later asked would he continue to direct he said : " No. No, I'm done with all that, thank you. I directed, I think, five or six films — I had a good time.”

* he had a love/hate relationship with the character of Spock and the Trek franchise.

P.S. In the early 1970's I attended an adult education evening class with my friend P.K. We were learning German. Unfortunately, the class clashed with 'Star Trek'. First, P.K. dropped out and then me, a few weeks later. Who knows, my spoken German might be better if it hadn't been for Captain Kirk and Mr Spock. It's O.K. Leonard, I don't hold it against you.