Japan is a country for old men 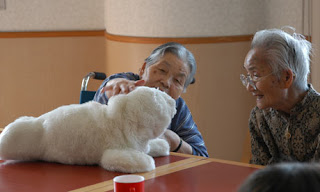 A robot pet stimulating old Japanese with dementia, is an example of how Japan is catering for the needs of its ageing population.

So, I have found it. I think my quest is over. I have found a place for old men, a country where you can grow old and be 'revered' and not be either looked down on, patronised or laughed at.
It is called 'Japan' and is turning its technology towards the problems of the 'new' old.

I found it in an article in the 'Guardian' today, which made some interesting observations : i.e. that Japan :

* Has a population ageing faster than any other nation : by 2020, there will be three pensioners for every child under 15, before long, one in six people will be over 80. That population will soon be falling by nearly a million people every year and some say that some time in the next century, the last Japanese person will die.

* Doesn't encourage immigration to solve its demographic woes, but is developing an array of hi-tech products and services.

* Gives a glimpse of what consumer society may look like in Britain when the baby boomers hit their 70s and 80s.

Which will talk to your GP, when it examines the healthiness of your stools. It has sensors which measure blood-sugar levels in urine and the blood pressure body fat of the user and the data is emailed to the GP.

Which not just have dashboards that have large numbers and letters, but also hand controls for the brake and accelerator, and swivelling seats that make it easier to get in and out.

Toyota is working to make cars which monitor brain activity. The car will learn the driving patterns of the user, then curb any unusual and dangerous activity. This is good : it would automatically slow the car if it senses the driver is hitting the accelerator for no reason.

* Bikes for the arthritic :

With 30 million people expected to enjoy a 30-year retirement, Japan has seen a boom in the purchase of artists' drawing kits and pen and pencil sets, as millions take up hobbies.

* As more care will fall on the dwindling number of younger adults, devices intended to allow them to remotely monitor the old without being too intrusive are now becoming popular. A good example is the 'Internet-connected kettle'. Each morning, when Granny boils the kettle this automatically triggers a signal to the carer that everything is normal.

Supermarkets are making aisles wider, for the old to move around more easily, especially in motorised wheelchairs. There is also a boom in health foods and and in particular, 'royal jelly' , which is believed helps to reverse the skin-ageing process.

Japan has twice as many pets as it has children and real animals are difficult to look after as their owners age. Paro, a furry white baby seal robot, responds to petting by moving its tail and opening and closing its eyes. It shows emotions such as surprise, happiness and anger, and has sold well in nursing homes where it is reported to stimulate responses among those with dementia.

Japan's Institute of Physical and Chemical Research has developed Riba, a nursing care robot that can lift the elderly out of bed.

One company maintains underground vaults for the storage of cremated remains. When family members want to pay their respects, they use a radio-frequency identification key to locate their loved one's remains which are dispatched to a private viewing area. Families can also view the memorial stone from anywhere in the world by logging in.

• Beds that turn into wheelchairs :

'Panasonic' last year launched a robotic bed that can transform into a wheelchair, so the old can get up without assistance. One half of the mattress rises, the other lowers and a unit slides out from the bed and the person is slipped into a motorised wheelchair. It can be driven around the home or even on to the street and when the person is sleeping, it helps turn them over to prevent bedsores.

And here is the way the Director Alexander Korda saw the H.G.Wells book ' The Shape of Things To Come' in 1936.