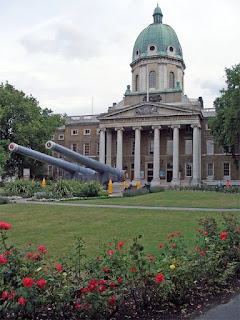 I went with my friend R.P. to the 'Imperial War Museum' in South London yesterday.

The journey was tortuous, involving us driving from North Kent to Greenwich and then by train to 'Waterloo East' and another train to 'London Bridge' and then a walk to the back entrance of the Museum. It was all worth it.

I hadn't been to the Museum for many years and may well have been there as a school child on a school visit. There were lots of school parties there yesterday and also retired people like myself and R.P. and we mingled together well.

The purpose of the visit was to go to the 'Photographic Archive' Section. R.P. wanted to pick up his Uncle's photo album which he had loaned it to the Museum for them to copy any photos from the 'Battle of Tobruk' in North Africa in the Second World War.

The 'Photographic Section' was a wonderful mix of the old and new. You could check references to the battle in an alphabetical card index of hundreds of draws filled with postcard size entries recording the information in copper plate handwriting. At the same time in the viewing room you could access photos on a monitor.

The young man who returned the album told us that he had copied 22 photos from the album of scenes from Tobruk the Museum didn't have.

Apart from getting the album, R.P. was interested in looking at the ships involved in the Battle. He combed through the album and found a few morsels. R.P. is still a water colour artist who specialises in Britain's naval power.

Our next 'port of call' after lunch in the restaurant, was the main gallery. It now had a glass roof to light the exhibits and before we left Kent R.P. showed me the paintings he had done for the Museum by commission, to envisage what the gallery would look like when the roof was done and suffused the exhibits with natural light. 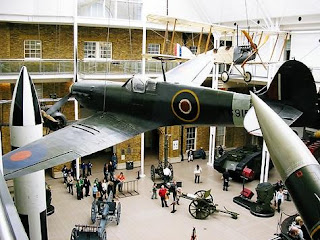 In the gallery R.P. explained the special features of each war plane and each tank. In fact, one or two visitors 'listened in' as we went round' probably thinking that he was a museum guide.

I was struck and impressed by the following :

* That we still employ people to care for our National Archives.

* That The First and Second World Wars are still part of the 'History National Curriculum' in State schools.

* That old and young can rub shoulders without friction in a museum whatever their motives for being there.

* That the old and young can still get excited about the details of long forgotten battles, witnessed by the fact that the young man was just as enthusiastic as R.P. 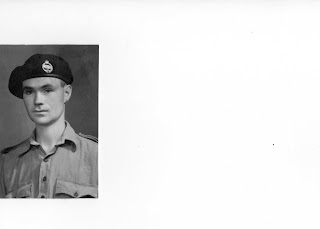 P.S. Like R.P., I too had an uncle who served in North Africa in the Second World War. He was in the 50Th Royal Tank Regiment. I'll have to do some research on him. I'm sure that, he too, was at the Battle of Tobruk.

The Imperial War Museum has :

* 19,000 paintings, drawings and sculptures constituting the second largest collection of 20th century British art in the world
* 15,000 posters
* 120 million feet of cine film
* 10,000 hours of videotape
* 56,000 hours of historical sound recordings
* more than 10 million photographs, negatives and transparencies
* over 15,000 collections of unpublished diaries, letters, memoirs and other papers
* 270,000 library items, including books, maps and ephemera
* plus thousands of three dimensional objects including, uniforms, medals, firearms, as well as hundreds of larger objects including aircraft and vehicles
Posted by ...............................JohnBoy at 02:45