John Griffiths, illustrator, whose bold creations adorned 'Penguin' book covers in the 1960's has died at the age of 85.

When I saw some of the book covers he did for 'Penguin Books' in the 1960's, I recognised them at once. It was a time when science fiction writers like John Whyndham and the astronomer Fred Hoyle were fireing the imagination of teenagers like me. 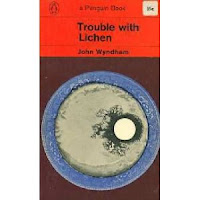 * was born in North London, an only child who grew up in a house devoid of books and artwork.

* left school, worked in a drawing office and an advertising agency and pursued his overriding ambition to draw, by study at a 'Working Men's College' and then the Royal Academy of Art.

* found 'art work' where he could,  his longest association being with a New Zealand publisher of school textbooks, but was 'obliged' to teach film and television studies at Goldsmiths' College and St Martin's School of Art in London, with further stints at Medway College of Design and Maidstone College of Art.

A link to some more of John's work :

I watched 'A for Andromeda' on black and white tv when I was 14 in 1961, a story where a group of scientists detect a radio signal from a distant galaxy with instructions for the design of an advanced computer, which in turn gives instructions for the creation of a living organism named 'Andromeda' in the form of the beautiful Julie Christie in her first major role :