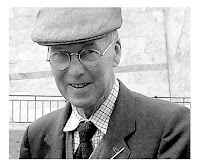 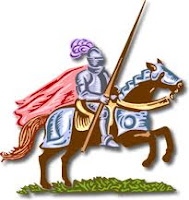 Maurice Keen, the historian of the Middle Ages who pioneered a radical reassessment of knightly values and admitted to having been drawn to his subject by a childish fascination with knights in shining armour, has died at the age of 78.

What you possibly didn't know about Maurice, that he :

* was born in London six years before the outbreak of the Second World War in 1933, his mother a talented painter and father the holder of  a senior financial post in Oxford, the 'Keeper of the University Chest', went to school at Winchester College, where the headteacher, Walter Oakeshott (right), turned his thoughts seriously to medieval knights.

* did his 'national service' in the Army in the Royal Ulster Fusiliers before he went to Balliol College at Oxford University in 1954 where he became the star pupil of celebrated historian R.W.Southern (left).

* had a stellar undergraduate career, capped in 1957 with a first class degree in 1957 followed by a junior research fellowship at Queen's College before he returned to Balliol, where he succeeded Southern as Fellow and Tutor in Medieval History and worked for 39 years from 1961 to 2000. 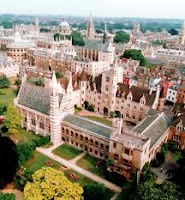 * became best known for his 1984 book, 'Chivalry', for which he received the Wolfson Foundation’s History Prize and after which no one could look at his subject, the knightly life, unaffected by his explanation of the culture of those who ruled western Europe for half a millennium. 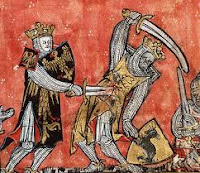 * in his book, asked the questions :  what was chivalry and  was anything more than a polite veneer ? and concluded that it was :

- not, as was shown by Thomas Malory and Walter Scott and popularly accepted, the code of knights who were romantic do-gooders.

-  not a decadent expression of the waning of the Middle Ages, which was the prevalent view among historians and associated with the Dutch cultural historian Johan Huizinga.

-  'tonal', 'not precise', in its implications, as an ethos in which martial, aristocratic and Christian elements were fused together and it was of key importance in the fashioning of the idea of 'the gentleman'.

-  grounded in the five cardinal virtues of 'prouesse, loyaute, largesse, courtoisie, franchise', that is, skill on the battlefield, loyalty to one’s lord, generosity, courtesy and a quality that suggested frankness and independence.

-  a serious feature of medieval politics, religion, nobility and society, not an exotic distraction
and mainly a cult of martial virtues for men and about men, charting a path to glory, honor and wealth and obedience to it from about 1150 to 1500, was the only way for aristocrats to move higher on the social ladder and commoners to reach the first rung.

*  became a legendary tutor at Balliol College and appeared in Frederick Forsyth's 1989 fiction, 'The Negotiator' :
When Simon and Jenny came back he nodded benignly and told them: “You’re with Dr. Keen, I believe. Corner of the quadrangle, up the stairs to the top.”
When they reached the cluttered room at the top of the stairs of their tutor in medieval history and introduced themselves, Jenny called him “Professor” and Simon called him “Sir.” Dr. Keen beamed at them over his glasses.
“Now,” he said merrily, “there are two things and only two that I do not allow. One is wasting your time and mine; the other is calling me ‘sir.’ ‘Dr. Keen’ will do nicely. Then we’ll graduate to ‘Maurice.’ By the way, Jenny, I’m not a professor either. Professors have chairs, and as you see I do not; at least not one in good repair.”
He gestured happily at the collection of semi-collapsed upholstery and bade his students be comfortable. Simon sank his frame into a legless Queen Anne chair that left him three inches off the floor, and together they began to consider Jan Hus and the Hussite revolution in medieval Bohemia. Simon grinned. He knew he was going to enjoy Oxford. 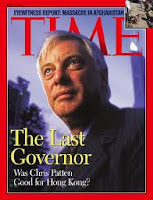 * was self-deprecating, charming, a fine tutor who won the respect and admiration of his pupils and when the now Lord (Chris) Patten, the last Governor of Hong Kong, started one of his essays with : 'Charlemagne can truly be called the founder of modern Europe', responded with : “I beg your pardon.”

*  shared the values of the knights he studied :  loyalty, duty, service, generosity, had an advanced sense and capacity for enjoyment and fun but was also a private man, most content exploring the ways of fish in quiet streams and enjoying the company of his family.

* in his last book The Origins of the English Gentleman in 2002,  traced how, between 1300 and 1500, the warrior knight transmogrified into the aristocratic gentleman.

*  first won national attention with his book, 'The Outlaws of Medieval Legend' in 1961, in which he established himself as an authority on the legend of Robin Hood who he concluded that : ' like King Arthur, is one of the most familiar figures whose memory has come down to us from pre-Reformation England. Like the historical Arthur, however, the real Robin Hood eludes the historian's grasp. For all our conjectures, we do not know who Robin Hood really was, and probably we never shall'.

Film makers have paid no attention to Maurice and I think that would not have bothered Maurice one jot. Nigel Terry as King Arthur in 'Excalibur' in 1991 : http://www.youtube.com/watch?v=emF-m9qnF5o