Britain is still a country where old men believe that when they were boys Captain Pugwash sailed in a ship manned by Master Bates, Seaman Staines and Roger the Cabin Boy 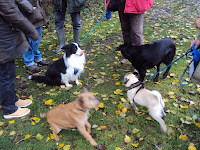 This morning, when I took this photo, the owners of these 4 dogs : myself, Kevin, Rob and Paul had 3 things in common, that we :

* were all old men.
* walked our 4 dogs along the banks of the River Medway in Kent.
and conversation revealed :
* believed that the children's tv series we saw when we were boys, called 'Captain Pugwash', contained names of characters with double entendre and sexual innuendo : Master Bates, Seaman Staines, Roger the Cabin Boy, 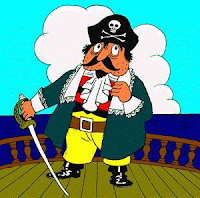 However, a bit of Google research by me this afternoon revealed that :

* the 'Captain' originated in a comic-strip format created by John Ryan in the first issue of 'The Eagle' magazine for boys in 1950, then appeared regularly as a strip in 'Radio Times' and in 1957 BBC tv commissioned a series of short cartoon films which became 86 five-minute-long episodes, shot in black-and-white film and later transferred to colour.

* the eponymous hero – Captain Horatio Pugwash – sailed the high seas in his ship, the Black Pig, ably assisted by the Master Mate and Tom the Cabin Boy, pirates Willy and Barnabas and was opposed by his mortal enemy, Cut-Throat Jake, Captain of the Flying Dustman. 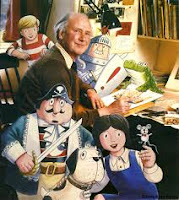 * the series had a memorable signature tune The Trumpet Hornpipes, which appears to have been popular from the mid-19th century with its composer and country of origin unknown : http://www.youtube.com/watch?v=j3nM2Ul4rLU

* in 1991 the Guardian newspaper published the retraction that : 'we stated that the Captain Pugwash cartoon series featured characters called Seaman Staines and Master Bates, and for that reason the series had never been repeated by the BBC. We accept that it is untrue that there ever were any such characters. Furthermore, the series continues to be shown on television and on video. We apologise to Mr. Ryan, the creator, writer and artist of the Captain Pugwash films and books. We have agreed to pay him damages and his legal costs.' 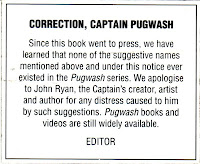 * in his 1992 book 'The Golden Age of Children's Television', Geoff Tibballs mentioned that some of the names in the  cartoon were a little rude and John Ryan, when he got wind of the anecdote, took great offence and threatened legal action and Titan Books, faced with the prospect of having to withdraw the book and pulp it reached a compromise and stickers were sent out to every bookshop in the land accompanied by a letter asking for them to be placed in every copy :

* in a stage show in 2009, Richard Digance claimed to have originated the urban legend in a 1970's sketch and when a 25-year injunction preventing him making any further references to Captain Pugwash expired at the end of 2008, made the material part of his act.

P.P.S. I had forgotten that I had already addressed this urban myth 2 years ago !

Is Britain still a country for Captain Pugwash ?
http://britainisnocountryforoldmen.blogspot.co.uk/2009/10/old-britons-do-you-remember-captain.html

An earlier post about old men and their dogs :

Labels: Captain Pugwash and the crew of the Black Pig