When I saw the video clip of  Hollywood actor Daniel Day-Lewis making his acceptance speech for his BAFTA award for 'Leading Actor' in the film, 'There Will be Blood' in 2008 and talking about his South East London childhood and "the playgrounds of his early life" it brought back memories of my own childhood in exactly the same places over 50 years ago.
http://www.youtube.com/watch?v=8LSFoQlIE3o

Daniel recalled :
"Invicta Infants School" which my sister had attended four years before him.

"Sherrington Primary School in Charlton" which I left to go the secondary school in 1958 and he joined after me in 1962.

"Greenwich Park" which I visited with my family on sunny, summer, sunday afternoons to see the flower gardens and enclosed deer.

" Blackheath" which I roamed over with my friends and caught stickle backs and tadpoles in its ponds.

" the streets of Deptford" where I grew up in Armada Street and went to my first school at Hughs Field.


"Lewisham"  where I was born and worked in a shop as a 'saturday boy' when I was at school and as a dustman when I was a student "and New Cross" where I went on family sunday visits to see Uncle Lloyd and Aunt Lou and my two cousins in Chipley Street.

" the bomb sites on the Isle of Dogs" 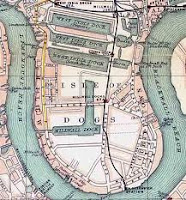 " the wharves and shadowy laneways of the South East London docks" where my Uncle Charlie worked as a docker.

" the terraces of Millwall football ground".

When I compare our early years, Daniel :

* lived in  'middle class' Greenwich in a house on Crooms Hill ( left) next to the Park and I in a council house (right) near Blackheath Village.

* had a famous father, Cecil, who was the poet laureate and mother, film actress, Jill Balcon, the daughter of Michael Balcon, Head of Gaumont-British, Ealing and British Lion studios and I had a dad who worked as a 'saw doctor' in a timber mill in Deptford and mother who worked part-time in a grocery shop in Blackheath Village.

*] was apparently often in trouble for shoplifting and other petty crimes and I was only in trouble at Sherrington Road School and caned on two occasions by the Headmaster.

* in 1968, at the age of 10, his parents finding his behaviour to be too wild, sent him to the independent Sevenoaks School in Kent (left) as a boarder, which he hated, though he was introduced to his three great interests of woodwork, acting and fishing, while I at 11 went to a state-run secondary school (right)

* was transferred to another independent school, Bedales in Hampshire which his sister attended and which had a more relaxed and creative ethos.

* made his film debut at the age of 14 in 'Sunday Bloody Sunday' in which he played a young vandal in an uncredited role and which he described as "heaven", for getting paid £2 to vandalise expensive cars parked outside his local church.
http://www.youtube.com/watch?v=jvf0IjmU6oE

I found these 2 memories of Daniel from his contemporaries at Sherrington Road School on a website called 'Charlton Life' :

* 'I went to Sherrington with him and we used to bunk into Charlton until he went home covered in red non drying paint. His mum went mad.'

* 'His mum took him out of Sherrington when he was about 10 because she saw the other boys as a bad influence. They moved to Kent and then Ireland. He was a good kid, he'd smoke and swear like the rest of us but his mum and Dad were very, very posh. When he went home for tea i had to sit on the doorstep 'cos they would'nt let me in.'
http://www.charltonlife.com/discussion/41914/new-article-living-in-charlton-village-in-the-195060s/p3

Britain is a country with a London borough called Lewisham where Jude Law and I both saw the first light of day
http://britainisnocountryforoldmen.blogspot.co.uk/2010/11/britain-is-country-with-london-borough.html

Labels: Daniel Day Lewis and I at Greenwich