Alan Garner, author of children's fantasy novels and reteller of traditional British folk tales, whose work is rooted in the landscape, history and folklore of his native county of Cheshire in the North West of England is 78 years old today.

* was born into a working-class family in the front room of his grandmother's house in Congleton and grew up around the nearby town of Alderley Edge and spent much of his youth in the wooded area known locally as 'The Edge' and gained an early interest in the folklore of the region from his grandfather, Joseph.

*  came from a family connected to 'The Edge' since the 1500's with a lineage back to the death of William Garner in 1598 and one with an oral tradition which taught him folk tales about the area which included a description of a king and his army of knights who slept under it, guarded by a wizard and and said the story became "deeply embedded in my psyche" and heavily influenced his later novels.

*  learned that in the mid 1800's, his great-great grandfather, Robert, had carved the face of a bearded wizard onto the rock of a cliff next to a well that was known in local folklore as the 'Wizard's Well' :
http://www.youtube.com/watch?v=SffeP0eGZjM

*  faced several life-threatening illnesses as a child and went to a local village school, where he found that, despite being praised for his intelligence, he was punished for speaking in his native Cheshire dialect.

* studied at Manchester Grammar School and then 'classics' at Magdalen College, Oxford University (right) and found that being the first member of his family to receive anything more than a basic education led him to be removed from his cultural background and something of a schism with other members of his family and said that they "could not cope with me, and I could not cope with them". 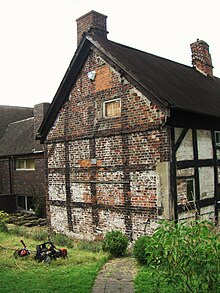 * in 1957,  moved to the nearby village of Blackden, where he bought and renovated the late medieval 'Toad Hall' (left).

* had his first novel, 'The Weirdstone of Bisingamen', a children's fantasy novel set in the Edge published in 1960 it revolved around two children, sent to live in the area with their mother's old nurse maid, Bess and her husband, Gowther Mossock who discover a race of malevolent creatures, the svart alfar, who seem intent on capturing them, until they are rescued by the wizard 'Cadellin' who reveals that the forces of darkness are amassing at the Edge in search of the titular 'Weirdstone of Brisingamen'.

* sent his book to the publishing company, Collins, where it was picked up by the company's head, Sir William Collins, on the look out for new fantasy novels following the recent commercial and critical success of J.R.R. Tolkien's, 'The Lord of the Rings and later said that "Billy Collins saw a title with funny-looking words in it on the stockpile, and he decided to publish it."

* after the critical and commercial success of his first book, produced a sequel, 'The Moon of Gomrath' in '63 also revolving around the adventures of the two children, Colin and Susan, with the latter being possessed by a malevolent creature called the 'Brollachan' who, with the help of the wizard Cadellin, is exorcised, but her soul also leaves her body, being sent to another dimension, leading Colin to find a way to bring it back.

* wrote a string of further fantasy novels, 'Elidor', 'The Owl Service' set in Wales and based on a medieval Welsh epic, the Mabinogion and televised in episodes in 1969 : http://www.youtube.com/watch?v=uyst2klpy08&feature=relmfu , 'Red Shift' in '73 before turning away from fantasy genre to produce 'The Stone Book Quartet' in 1979, a series of four short novellas detailing a day in the life of four generations of his family and a series of British folk tales rewritten in a series called 'Alan Garner's Fairy Tales of Gold' in '79 and 'A Bag of Moonshine' in '89.

* set 'Elidor' in contemporary Manchester with four children who enter into a broken down Victorian church, only to find a portal to the magical realm of Elidor and later said : "I had to read extensively textbooks on physics, Celtic symbolism, unicorns, medieval watermarks, megalithic archaeology; study the writings of Jung; brush up my Plato; visit Avebury, Silbury and Coventry Cathedral; spend a lot of time with demolition gangs on slum clearance sites; and listen to the whole of Britten's 'War Requiem' nearly every day.'

* His collection of essays and public talks, 'The Voice That Thunders', contains much autobiographical material, including an account of his life with bipolar disorder, as well as critical reflection upon folklore and language, literature and education, the nature of myth and time.

* after the further novels of  'Strandloper' and 'Thursbitch' , finally published his third book in the Weirdstone trilogy, 'Boneland', 52 years after the first.

* mindful of his craftsman ancestors in 2010 that " I had to get aback to familial ways of doing things, by using skills that had been denied to my ancestors: but I had nothing that they would have called 'worthwhile'. My ability was in language and languages. I had to use that, somehow, and writing was a manual craft, but what did I know that I could wite about ? I knew the land".