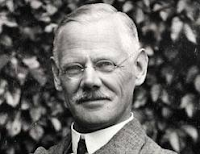 This is Seebohm Rowntree, sociological researcher, social reformer and industrialist, who 112 years ago  published his study, 'Poverty in York'. It became a seminal work of sociology and for the first time used the concept of the 'poverty
line', showing that, in their lives, labourers lived below the poverty line when they were children, when they had their own children and when they were old and 'past work'.

Of the 46,000 people Rowntee surveyed, his study revealed that 20,000 were living in poverty; defined by falling below a calculated minimum weekly sum of money 'necessary to enable families to secure the necessities of a healthy life'.
His findings proved instrumental in changing public perception of the causes of poverty, and are widely regarded as a significant catalyst in the Liberal reforms from 1906 to 1914 which provided the foundation for the modern-day welfare state.
https://www.youtube.com/watch?v=-rN3WG1SMss
Fast forward 112 years and we find that Britain still has many people and in particular old men and women living 'below the poverty line', surviving on an income of less than £8,254 a year. 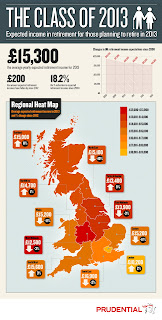 The Prudential's 'Class of 2013' research, based on interviews with 1,007 people retiring this year, found that many are facing a bleak financial outlook and :

* one in five of the old men and women retiring this year will fall below the poverty line.

* nearly one old man in ten (14%), will depend solely on the state pension, currently a maximum of £110.15 a week, as they have no other pension arranged and among old women the figure rises to over two in ten (23%).

* many overestimate just how much they will receive from the state, on average 'guessing' at a figure that is £600 a year more than they will actually receive and around one in 10 said they have 'no idea what the state pension will pay.'.

* old Welsh men and women are the worst-off, with 25% of them below the poverty line compared to 14% in London.

"Against a backdrop of rising living costs, the basic state pension alone is not nearly enough to provide a comfortable standard of living. While it's a very valuable source of additional income for millions of pensioners, the state pension should ideally only represent a part of someone's retirement income, not all of it."

According to separate research by pension consultants 'Hymans Robertson', many old men will now have to work long past their state pension age to maintain a decent standard of living. It found that as employers have axed generous 'final salary schemes' and many employees no longer have sufficient savings to be able to afford to retire.

Poor stock market returns, worsening annuities and improved longevity have combined to make the task of saving enough for retirement a near impossibility for many people. In April, the Office of National Statistics said that the pension fund needed to buy an income of £5,000 year in retirement had risen by 29% in hust three years to £152,800.

David Smith, Wealth Manager at 'BestInvest' said:
" The vast majority of people simply can't afford to save enough to a defined contribution pension plan to secure retirement at age 65 or earlier."
Based upon current annuity rates a 65-year-old male would need a pension pot of roughly £500,000 to generate a pension income of £25,000 per annum gross and this is without allowing for the impact of inflation.