Britain is still a country for an old farmer called Michael Eavis, an old arts festival at Glastonbury and an old rock band called the Rolling Stones

Michael is the 77 year old dairy farmer who founded the Glastonbury Festival, the  largest greenfield and performing arts festival in the world, 43 years ago when he was 34.

When asked why the Rolling Stones had agreed to appear at this year said : "Everybody's done it except them, you see. They knew they were conspicuous by their absence. This is England's pride and joy. Americans love it. We've been chosen as the best festival in the world so many years running" and " U2 did it two years ago http://www.youtube.com/watch?v=OPRu58705Fo as well. They didn't do it for money either. It cost them $2m to actually play here" and "Paul McCartney lost a lot of money here."

Of the old rockers, Mick and Keith are 69, Keith is 66 and Charlie is 72 giving them a combined age of 276 years ! Who says Britain is no country for old men ?
https://www.youtube.com/watch?v=1VFtv4KRWn4

* was born Athelstan Joseph Michael to a mother who was a school teacher and father who was a Methodist preacher, was brought up on Worthy Farm in Pilton, Somersetshire and, at the age of 9, attended as a boarder and was educated at the Wells Cathedral Public School.
http://www.guardian.co.uk/lifeandstyle/2013/jun/07/michael-eavis-glastonbury-festival-family-values

* left school, joined the Thames Nautical College, then joined the Union-Castle Line, part of the Merchant Navy, as a trainee midshipman planning to spend 20 years at sea, returning with a pension to subsidise the income from the family farm.

* was called back to the 61 hectare farm with its 60 cows at the age of 22, after his father died in 1958 and has continued as a dairy farmer ever since.

* in 1969, after visiting the 'Bath Festival of Blues', was inspired by the performance of Led Zeppelin to host a free festival on his farm the following year with Marc Bolan, Al Stewart and 'Quintessence' on the bill with tickets selling at £1.
http://www.guardian.co.uk/music/2013/jun/12/the-first-glastonbury-rocks-backpages

* in the early days, let in the skint and unemployed for nothing and the mid-80s, a convoy of travellers banned by the Army from Stonehenge who repaid him by burning 50 Land Rovers and forced him to consider stopping the Festival for good, but continued and formed a working relationship with one of the most obstreperous, installation artist Joe Rush, who has contributed regularly to Glastonbury ever since.

* in 2005, was quoted in 'The Guardian' as being a supporter of fox hunting. "I don't hunt myself, but I support the people who want to hunt. With all that's going on in the world, it was outrageous to ban it."

* in 2009, was nominated by 'Time Magazine'  as one of the top 100 most influential people in the world and in 2010, at the Festival's 40th anniversary, appeared on the main stage with headline artist Stevie Wonder to sing the chorus of  "Happy Birthday". https://www.youtube.com/watch?v=hfZ0oRhIdqw 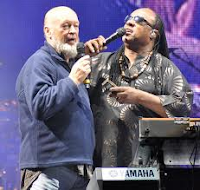 * is a Methodist by religion, who on the one hand doesn't either approve of drugs or think much of alcohol and can be heard railing : "Terrible drug, alcohol. The Muslims got it right on that, actually. If you've got responsibility, you shouldn't drink" but on the other hand takes risks and embraces freedom.

* in June 2011,was quoted as lamenting the decline in political activity associated with the Festival, when days later, a protest by 'Art Uncut' against U2s alleged hypocrisy on matters of taxation was stopped with force by Festival security.

* said : "The programme's better than ever … I'm particularly looking forward to Nick Cave and Steve Winwood and wait till you see the new loos. No emptying – it goes straight into the ground. After 43 years, we've finally got the perfect loo."

* still regards himself as a farmer first and foremost and easier to reconcile with his Methodism : "Being a farmer is more authentic than organising Glastonbury. You're rearing cattle, you're feeding people. There's no branding, no sales pitch, it's just a natural way of living. There's no contamination, no transport, trains or planes. The festival has got a lot of other stuff – drugs, drinking, branding. It's a different thing. I love the Festival. That's why it's so successful – because I love it so much. But you offered me a preference, and I'm just telling you why I prefer the farm."

* has apportioned profits from his Glastonbury Festival to support charitable causes, including local projects such as the restoration of the Tithe Barn in Pilton and is hoping to keep going to the 50th anniversary in 2020 when he'll be 84.

So there were the old rockers on stage last night opening with 'Jumpin' Jack Flash', with Mick Jagger prowling the stage in a green sequinned jacket and after 'It's Only Rock 'N' Roll (But I Like It)', joked that the organisers had "finally got round to asking us to play." He then belted out a total of 20 songs on the two hour set. After 'Satisfaction' he said : "We've been doing this for 50 years or something. And if this is the first time you've seen a band, please come again."
https://www.youtube.com/watch?v=OM51e8Stat8 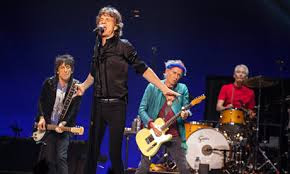 Michael's comment : "They finally did it, and it was fantastic. My God, did they deliver." Speaking immediately after the band came off stage, he called it "the high spot of 43 years of Glastonbury".