Tom Sharpe, comic novelist, whose bawdy style, savage pen and biting turns of phrase helped to earn him the title of the 'Master of British Farce', has died aged 85.


What you possibly didn't know about Tom, that he :

* was born in Croydon, South London, before the Second World War, his mother and South African and his father was a Unitarian minister in his religion and a fascist, a follower of Oswald Mosley (right) and believer in Adolf Hitler in his politics and when the War broke out in 1939, moved continuously with his family to avoid his father being interned with other British Nazis.

* went to school at Lancing College, West Sussex and later said that the most significant thing that happened was a friendly master giving him Waugh's 'Decline and Fall' to read which had, he said, a tremendous influence when he came to write his own comedies and was also influenced by the writing of P.G. Wodehouse.

* at school, wore a German army belt with 'Gott Mit Uns' on the buckle and when he went to the seaside, used to daydream of scrambling over the barbed wire and swimming across the Channel to occupied France to "join the good guys".course and came close to having a nervous breakdown when he saw the newsreels liberation of the Nazi death camps at the end of the War.

* at the age of 18 in 1946, did his national service for two years in the Royal Marines and then went to Pembroke College, Cambridge where he studied history and social anthropology.

* in 1951 at the age of 23, went to South Africa, where he did social work for the 'Non-European Affairs Department' and witnessed the horrors inflicted on the black population through the apartheid regime and then taught in Natal for a time before setting up a photographic studio in Pietermaritzburg in 1957.

* wrote a play, 'The South Africans', which criticised the country's racial policy and, although it only a small production in London, was enough to bring down on him the wrath of the 'Bureau of State Security' and hounding by the secret police, spent Christmas 1960 in jail before being deported back to Britain for sedition in 1961 and was questioned and intimidated by the police when the ship docked at ports along the coast. 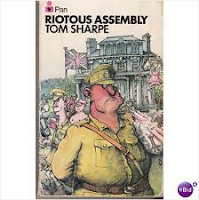 * on returning to Britain, took a position as a history lecturer at the Cambridge College of Ats and Technology and after some years started his writing career in 1971 and in just three weeks, wrote the novel 'Riotous Assembly', set in South Africa and describing the chaos that ensues after an innocent black man is blown apart by an elephant gun in a comic send-up of the South African police, to whom he dedicated the book 'whose lives are dedicated to the preservation of western civilisation in southern Africa'.

*  continued his crusade against racism with 'Indecent Exposure' in 1973, in which Kommandant van Heerden is under the mistaken impression that he had been given 'the heart of an English gentleman' in a transplant operation and starts to read the British novelist Dornford Yates.

* gained a large readership as a bestseller author who, in 1976 introduced his most popular character: Henry Wilt, a mild-mannered teacher of literature at the fictional 'Fenland College of Arts and Technology', who gets involved in a murder investigation and claimed that the account of teaching day-release apprentice butchers and tradesmen in classes timetabled as 'Meat One' and 'Plasterers Two', were based on his own experiences as a college lecturer.
Quote : 'The man who said the pen was mightier than the sword ought to have tried reading The Mill on the Floss to Motor Mechanics.'

* continued his dissection of English life with 'Blott on the Landscape' in 1975, then returned to Wilt, the long-suffering lecturer seen as his alter ego, 'an insignificant little man to whom things happened and for whom life was a chapter of indignities', with 'The Wilt Alternative' in 1979, 'Wilt on High' in 1984.

* found that the film of Wilt, starring Griff Rhys Jones in 1989, brought him an even wider audience, as did the tv adaptations of his novels, ' Blott on the Landscape', starring David Suchet in 1985 and 'Porterhouse Blue' starring Ian Richardson and David Jason in 1987 (right).
Quote : 'I have yet to meet a liberal who can withstand the attrition of prolonged discussion of the unessentials.'
https://www.youtube.com/watch?v=bdTUOSMt5QM

* found that ill health forced him into the long silence, after suffering a heart attack live on tv in Spain, from his 'Wilt on High' in 1984 to 'Grantchester Grind' in 1995 followed by 'The Midden' in '96 and later said that he kept writing every day of those 11 years, but did not think the work good enough.
Quote form Wilt : 'There's nothing I enjoy more than listening to a highly trained intelligence leapfrogging common sense and coming to the wrong conclusions. It gives me renewed faith in parliamentary democracy.'

* from 1995, with his American wife, Nancy, divided his time between Cambridge and their home in Llafranc, Spain, where he wrote 'Wilt in Nowhere' in 2004, of which Will Hammond in the 'Observer' said that he gave : 'voice to a deep-rooted part of English culture', and 'confirmed once again that his position at the heart of British comedy is as assured as that of the seaside postcard. Over the course of his prolific career, he has been hailed as the king of slapstick, a satirist in the line of Wodehouse, and a major craftsman in the art of farce (a spoonerism he would no doubt enjoy). In 'Wilt in Nowhere', he shows himself to be all these and more: vengeful, chaotic, Swiftian in his tastes, cartoonish in his extremes, and above all wild and amusing.'

* gave an interview on Spanish tv in 2009, with his doctor to explain how she saved him when he fell ill with peritonitis. http://www.youtube.com/watch?v=axBT7C9jKbg

* produced his last book, 'The Wilt Inheritance' in 2010 and died this week in Spain, where he spoke neither Spanish nor Catalan saying : "I don't want to learn the language. I don't want to hear what the price of meat is."

His friend, the former 'Guardian' editor. Peter Preston said : "Tom never forgot or quite broke free from his roots. His father's influence and politics were a constant, conflicted, almost obsessional memory. He could remember every detail of his life in South African prison. I saw him last only a few weeks ago, recovering from a stroke and starting to read his own books as therapy. He was still funny, still irascible, still interested in everything. It was a life drawn in bold colours and lived vibrantly to the end."

Susan Sandon, his editor at Random House, said of Tom, that he was a man who was : "warm, supportive and wholly engaging and one of our greatest satirists and a brilliant writer. Witty, often outrageous, always acutely funny about the absurdities of life."

What better obituaries could an old Brit wish to have ?