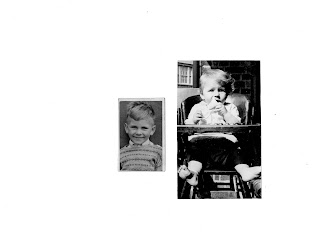 The little chap in the photo is me at about the age of about 1 and 3, about the time the BBC radio programme, ' Listen with Mother', was first broadcast in 1950. It was 15 minutes long and consisted of stories, songs and nursery rhymes for kids like me under the age of 5 and,of couse, their mums sitting with them and there were a million of us. Looking back now, that lost 'listening' and 'reading' pre-television world was so different to the one we live in today.

Each programme began at 1.45pm each weekday and began with the familiar, and now iconic, phrase:
" Are you sitting comfortably ? .Then I'll begin"- heard with the introductory music in this link :
http://www.google.co.uk/imgres?imgurl=http://www.turnipnet.com/whirligig/radio/dorothy_smith.jpg&imgrefurl=http://www.turnipnet.com/whirligig/radio/lwm.htm&usg=__pNkKeQxtaoi-PxF4ixL10byfayo=&h=185&w=146&sz=5&hl=en&start=11&zoom=1&tbnid=soHLCjIBlg7chM:&tbnh=102&tbnw=80&ei=amiZT6CpC86YOvTurL8G&prev=/search%3Fq%3DDorothy%2BSmith,%2BBBC%26um%3D1%26hl%3Den%26sa%3DN%26rls%3Dcom.microsoft:en-gb:IE-SearchBox%26tbm%3Disch&um=1&itbs=1

Presenters and story readers included Daphne Oxenford and Dorothy Smith, who each contributed to the programme for more than 20 years, before it ended in 1982.

roducer:
When I'm building a programme, I always have in mind just a child or a couple of children in the intimate setting of the home, with or without mother, although we call the programme Listen with Mother.

We find still that children believe that the storyteller is inside the box in some way, that this disembodied voice creates a very concrete and vivid image in the minds of the children.
Interviewer:
What about the piano? That must be rather a problem to accommodate that in the radio as well?
Producer:
Well, indeed. One child we heard of walked round and round the box and did express great surprise that, not only was the speaker there, but the piano there too, but didn't question it, didn't query this. And children very often go to the set and stroke it and touch it and press their ears close up to it, treating it very much as they would treat a visible storyteller.
Interviewer:
Do they seem to have a sense that the stories are being told just for them individually?
Producer:
Indeed yes, they believe that the storyteller sees them. They believe that she hears their replies. We heard of one little girl, who talked to her little boyfriend next door, and who said, my lady played Humpty Dumpty today, and the little boy's reply was, so did mine. They didn't at all think that this was the same programme. They still thought it was an individual programme each for her or for him.

What I, and possibly you, didn't know about this remarkable woman was that she :

* was born into a Jewish family in Salford,  Manchester, wanted to be a writer from the age of six, when her first poem was published in a comic,  had a painful 'non-relationship' with her 'doctor' father, who refused to speak to her because she wasn'tt a boy and only began to communicate with her when he and her mother split up, just as she was leaving school. 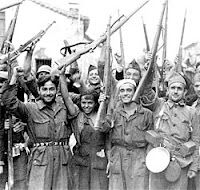 * at the age of 17, was influenced by the work of the educational psychologist Susan Isaacs, on the right, on the social development of children at a nursery school in Cambridge where children were given free rein to read, learn and explore and began to form her own anti-authoritarian and progressive views on children, education and society.

* in 1937,  agreed to go to teacher-training college "for one term only" but having joined the 'Youth Front against War and Fascism' and then the 'Young Communist League' spent her time writing and organising aid to Spain during its Civil War where two of her lovers, in the International Brigades, fought and were killed.

* left college before she could be expelled, went to King's College London to study for a 'Diploma in Journalism', graduated and then started work on the 'Daily Worker' newspaper and during the Second World War, married and heavily pregnant, narrowly escaped death with her husband when their house in London, was bombed, an experience she described  as like becoming a 'refugee' in her own country.

* after the War, began to write children's books based on her own experiences and shaped by a desire to show children as they really were : active, argumentative and thinking, as in her 'Little Pete Stories' in the 1950's.


* had the unique distinction of being, after her first story, thrown out of the new infants' radio programme Listen With Mother, because seven listeners protested that they were shocking and anarchic :'he goes downstairs backwards!' and they 'didn't pay their licence fee for her to 'corrupt children'.

*   she, when the review magazine, 'Junior Bookshop' kept talking about her 'The Little Pete Stories' as being 'the best thing that came out of Listen With Mother', wrote to them and said, 'Yes, they did, fast!'

*   in the 1960s, wrote the 'Nippers' series which moved away from the comfortable middle class world of 'Janet and John' and showed a world where houses had no internal water and children played on dumps.

* came into contact with Michael Duane, the head of Risinghill Comprehensive School in Islington and, in her book about its closure, 'Risinghill : Death of a Comprehensive' in 1969, argued that its very fame and success were threatening to the educational establishment and wrote : 'Once you believe, or say you believe, that all children are of equal value whatever their intellectual attainments, you are changing the whole concept of school.'
*  received the Eleanor Farjeon Award for 'services to children's literature' in 1974, spent her later years in Wivenhoe, Essex and was delighted to discover that the 'Children's Legal Centre',(in whose creation she had been instrumental in its early days, was then housed at the nearby Essex University. 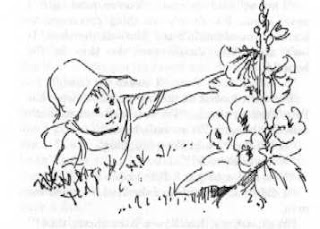 'Pete stopped and stared. He liked flowers.
One of the flowers, a big nodding comfy-looking one, was looking right into Pete's face. Very carefully he put out one finger and touched it.


At that very second someone slammed up a window in the house with a big crash, and someone shouted: "Leave those flowers alone!"
Pete had a terrible fright. He snatched back his finger. Then he stood stock still, not moving at all. He thought he was going to cry.'


P.S. I wonder if, in creating Pete, Leila was creating the boy her father had always wanted ?