The Foreign Secretary in the Government is William Hague and his 83 year old father, Nigel, performed this breath- taking 'wing walk' to raise the profile and hopefully £50,000 of the charity NSPCC (National Society for the Prevention of Crueltyto Children). Ross Parry's photo gives excellent idea of the magnitude of his feat.

Some facts about Nigel which you possibly didn't know, that he :

*  has so far raised more than £100,000 for the children's charity with his white knuckle activities, such as completing a tandem skydive last year and an arduous climb in 2009. 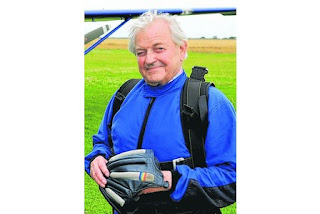 * spent last Saturday afternoon strapped tightly to the top wing of a biplane as it swooped, banked and looped in the sky above Selby, North Yorkshire and with one hand waved and occasionally made rude gestures, while his companion Beryl watched from below, willing him down and praying for it all to be over. 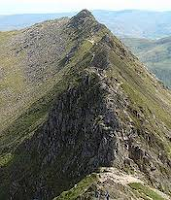 * started his fund-raising dare-devilry when he was 79 in 2008 saying "I’d just climbed Helvellyn and Striding Edge in the Lake District, which is highly dangerous, and my (late) wife said, ' if you’re still fool enough to be climbing mountains at your age, then you ought to do the next one for charity'. So I did."

*  in 2009 he scaled 3,209ft Scafell Pike in the Lake District in seven-and-a-half hours, raising nearly £52,000 and said "It took me three-and-a-half hours to get to the top and another four to get down — I’ve always been all right with my knees.’ 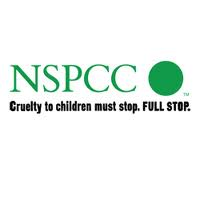 * after the wing walk said that it was : "So exhilarating — everyone should do one some time in their life, however old they are. It’s better than sitting here on your fat arse watching that damn thing, (tv)  I hate it. I can’t stand it. I watch the news but they should call it the bad news because that’s all they tell you. I’d like to take a shotgun and blow it to kingdom come. Though I do like nature programmes."


* said in relation  to his next feat  : "I was planning on doing an abseil down that big building in London. But they’ve grounded me because of the insurance — something to do with my age. It’s pretty tall, but you’re just as dead if you fall off the garage roof, aren’t you? And then there was all the health and safety rubbish. They’re a crazy lot, aren’t they? I’d take them out and shoot ’em down like dogs.’

P.S,
Nigel drinks three pints of John Smith beer and a glass of red wine every night and walks three miles to pick up The Yorkshire Post every morning.