My stay in Germany is almost over.
So what have I learnt about the differences and similarities between the lives of old men in Britain today and those in Germany ?

My impressions are that : 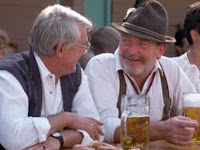 * because Germany has a very large proportion of old men and women, I didn't know that after Japan and Italy, it has the largest in the world, it as a country, is doing more thinking about how to cope with having a lot of old people living longer than Britain.

* Germany's new multi-generational homes, which give a role for old people in their communities, are an interesting new move to address the problem of more old men and women :
http://britainisnocountryforoldmen.blogspot.de/2012/05/britain-is-country-where-old-men-need.html

* Germany's new prison in Lower Saxony, designed specifically for old criminals, is an interesting move to address the problem of more and more old felons :
http://britainisnocountryforoldmen.blogspot.de/2012/05/britain-and-germany-are-no-countries.html


* On the other hand German attitudes to the danger of old drivers on roads is way behind those in Britain :
http://britainisnocountryforoldmen.blogspot.de/2012/05/britain-is-less-and-less-and-germany.html

On balance, at this point in time, I think that Germany is 'marginally' more of a country for old men, both today and tomorrow, than Britain.