Britain's old men say "Goodbye" to Peter Halliday with black and white tv memories of him, the beautiful Julie Christie and 'A for Andromeda' when they were boys 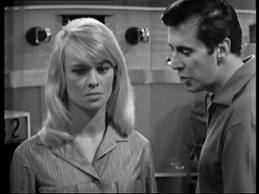 Peter, who has died at the age of 87, played a number of parts on tv and in film over the years, but it is as the young scientist John Fleming assisted by Julie Christie, as Christine, in her first major role in 'A for Andromeda' in 1961, that I, along with other baby boomers, shall remember him.
I was 14, Julie was 20 and Peter was 36.

The series, written by the astronomer Fred Hoyle, concerned a group of scientists who detect a radio signal from a distant galaxy which contained instructions for the design of an advanced computer which, when built, gives instructions for the creation of a living organism named 'Andromeda' whose purpose Peter feared was to subjugate humanity.

As the story unfolds it moves to 1971 and the protoplasmic life form with a giant eye, nicknamed 'cyclops', continues to grow. Peter, ever more sceptical about the project,  realises that two terminals either side of the computer's main display affect the brainwaves of those who stand near it. His warnings are not heeded and Christine, mesmerised by Cyclops and the machine, is compelled to grasp the two terminals – she falls to floor, killed by a massive electric shock.

I was in a state of shock too because Julie, with whom I had, by this time fallen in love, was dead ! How could they do that to a tender adolescent ? Then she was brought back to life as an embryo, the clone of Christine.

Other things I, and possibly you didn't know about Peter, that he :

* was born near Llangollen, North-East Wales and after leaving school at 18 was 'called up' by the Army and spent three and a half years in Iraq, Palestine and Egypt.

*  auditioned for a place at the Royal Academy of Dramatic Art and, much to his surprise, was accepted, became friends with Patricia Hitchcock, the daughter of film director, Alfred Hitchcock, taught he about cricket and she, in turn, introduced him to some of Hollywood's greatest actors, including Ingrid Bergman and Joseph Cotten.

* graduated in 1949 and got his first job with the  Royal Shakespeare Company, where he stayed for four years under the leadership of John Gielgud and Anthony Quayle, worked with Richard Burton, who became a good friend along with Sean Connery.

* in the years which followed worked in the National Theatre but became a recognised face with his work on tv appearing in 'The Inspector Lynley Mysteries' in 2001 (right) and where one of his last roles in the series, 'Where the Heart Is', took him to Australia, New Zealand, South America and China.

Another 'goodbye' to Peter :
http://www.youtube.com/watch?v=q_e4wt3I5k4