Britain is a country where old men in Yorkshire 'celebrate' the passing of an old, ex-Prime Minister called Margaret Thatcher 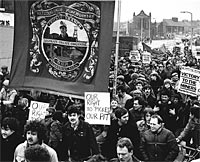 South Elmsall in West Yorkshire was a village once dominated by Frickley Colliery, whose 1,800 miners took part a 12-month strike for jobs in 1984-85.

Yesterday, 69 year old Graham Whitehurst, a former face-worker in the coal mine who was made redundant in 1994, clenched his fists in pleasure at the news of  the ex-Prime Minister's death yesterday. He said :

" The Tories always hated the working class. They hated us, and we hated her. She should have died 30 years ago.”
He was not alone. In the 'Brookside Social Club' they played Barbra Streisand’s, 'The Witch Is Dead' time after time at ear-splitting volume with the clubbers singing
“Thatcher’s dead, Thatcher’s dead” in the chorus.
https://www.youtube.com/watch?v=R0287UFq9SA


Tony Harrison, a former pit man, said: “She ruined the community. She had wanted to put down the miners ever since she came to power in 1979.


She had never forgotten the defeat we inflicted on Edward Heath.”
Gordon Wain, 62, an ex-mining surveyor said:
“She killed the union and she killed the pit. Everybody suffered.”
John Stones, 75, former National Union of Mineworkers delegate at Frickley said :
“I’m sorry for those who cannot be here today. Those who passed away before she died.”


Ken Carroll, 69, a former face worker said :
“They should drop her down the shaft of the last pit that’s open, or put tonnes of coal in her coffin.” 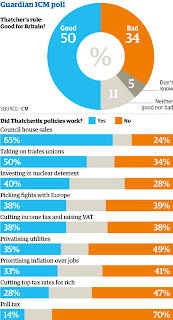 Terry Carter, 81, the oldest member of the Empire, who recalled when she  repeated the words of St Francis of Assisi on the steps of Downing Street in 1979 :  https://www.youtube.com/watch?v=A23PQCndPYU said :
“It’s a wonder that a bolt didn’t come down and hit her.
I knew exactly what she was going to do. She beat every single union, one by one.”
In the Empire Working Mens' Club up the road in Moorthorpe they had to extend the opening time to cope with the demand. It was 'Thatcher's hour' for the jubilant drinkers,

In South Elmsall has not just lost its pit. The pubs have gone. Only two working mens' clubs remain, the market is under threat, the Co-op has closed and the village is now a commuter centre for nearby cities.
In January 1993 these miners were about to begin their shift at Frickley Colliery but despite the smiles the men knew that the colliery was about to close and they were about to loose their jobs. It was demolished in the same year that this picture was taken. 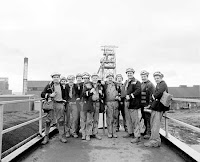 Graham and the other old miners in the village are not alone in considering the 'bad' effects of the policies of Mrs Thatcher and her Government from 1979 to 1990 as revealed in an ICM poll of 965 adults for the Guardian yesterday afternoon.
Graham had taken part in a major industrial action in the British Coal industry and its defeat, which significantly weakened the British Trades Union movement, was also seen as a major political victory for Margaret Thatcher and the Conservative Party. The political power of the National Union of Miners was permanently broken. The strike was interspersed with violence : six picketers, three teenagers searching for coal and a taxi driver taking a non-striking miner to work all died.
https://www.youtube.com/watch?v=Iw9zbTsKNAA

Labels: A celebration of Margaret Thathcher's death in South Elmsall