Britain is still a country for a very old poet called Dannie Abse ...and his parrot

Dannie, now almost 90 years old, was born in Cardiff, Wales to a Jewish family and was the younger brother of the late  politician and reformer, Leo and eminent psychoanalyst, Wilfred. 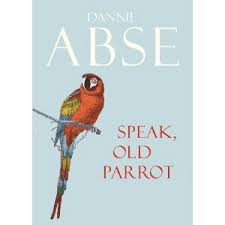 One of Britain's most well-respected poets, Dannie has produced a new anthology of poems named after the ventriloquist bird invoked at the beginning and end of his collection is bright-plumed but fugitive. He was interviewed on the BBC Radio 4 Today Programme by the 69 year old Welshman, John Humphrys. Dannie began by reading his poem:
Talking to Myself
I, old man in my new timidity,
Think how profligate, I wasted time.
Those yawning postponements on rainy days,
Those paper hat hours of benign frivolity.
Now time wastes me and there's hardly time,
To waste for vascular speech.
The aspen tree trembles as I do,
And there are feathers in the wind.
Quick, quick, speak old parrot,
Do I not feed you with my life ?

John : You talk of wasting your life. It's hard to think of many people who've had a fuller life than you have had.
Dannie : On yes, I wasted a hell of a lot of time sitting in cafes in Swiss Cottage when I was young and just sitting down and staring. No, I wasted a hell of a lot of time.
John : You've done a huge amount. You've not only become one of the favourite writers of your generation, you've been a hugely successful doctor. You've done all manner of things, even a footballer.
Dannie : I have just often been in a state of mental paralysis and maybe that's led to writing poetry, because I had to prove to myself I'm alive.
John : So you didn't set out to become a poet did you ? Did you set out to become a doctor ?
Dannie : I was put down for Westminster Hospital when I was 15 or 14 by my eldest brother, Wilfred.
John : You didn't have much choice then. It was foisted upon you.
Dannie : I didn't mind. I'd heard stories from my elder brother, he was a medical student. He told me stoies about othe medical students, how Tonken Davis had cut off a penis from a cadaver and went to a saturday night dance and took it in his pocket, much to the consternation of his partner. So I thought it would be great fun to be a medical student rather than being a doctor. Most days I wasn't thinking of writing poetry. I wanted to play for Cardiff City in Wales.
John : I ty to imagine what what the conversation would have been like in your house when you were a young man. There was your elder brother, Leo Abse, who became a great reforming politician. Your older brother still, became a very eminent phsychoanylst. I wondered what the conversation was like.
Dannie : It was a privilege to hear their conversation in the 30's. Leo was seven years older than me and Wilfred was nine years older than me and I was hearing the conversation about Karl marx and Sigmund Feud as a teenager.
John : Now what about old age ? You've porduced a book of poetry at the age of ninety. Is that it ?
Dannie : I keep telling myself how well some poets like Thomas Hardy and Yeats did in their old age and that gives me encouragement to write.
We're an amalgam of many selves aren't we ?  I mean, however sedate we may be, there are sometimes an evil one escapes and I have an inspirational self, that's what my parrot is.
John : Will you keep writing poetry ?
Dannie : I don't know. I have to wait and see if that parrot returns. At the moment the cage is pretty empty.
John : You don't just sit there now with the blank in front of you. Do you still do that ?
Dannie : No, but I leave the cage door open.
John : I think a lot of people hope that it does return and there will be much more poetry and perhaps we'll talk again on your centenary.
Dannie : I have the feeling that this could well be my last 'new' book of poems.

What you possibly didn't know about Dannie, that he :
* was born in 1923 in Cardiff to Jewish parents, with one grandfather from Poland and his grandmother from Germany and studied Medicine in Wales and at King's College, London, qualifying as a doctor in 1950.
* had his first collection of poetry, 'After Every Green Thing', published in 1948 and combined hs careers as both a doctor and a specialist at the Central Medical Establishment Chest Clinic between 1954 and 1989.
* endured the tragedy of his wife being killed in a car accident in which he suffered a broken rib in 2005 and published 'The Presence,' a memoir of the year after his wife died, in 2007 and saw it win the 2008 'Wales Book of the Year Award' and later dramatised for BBC Radio 4.
* read for Oxfam in 2007.https://www.youtube.com/watch?v=OmNXUai