Britain is a country which will soon say "Goodbye" to a brave, barely old, Scots novelist called Iain Banks

Bestselling author Iain Banks, who is 59 years old has announced that he has been given only months to live. Best known for 'The Wasp Factory', Iain has gallbladder cancer. His illness was reported on the BBC : https://www.youtube.com/watch?v=2cutNXByHMo

* using his deadpan humour, said : "I've withdrawn from all planned public engagements and I've asked my partner Adele if she will do me the honour of becoming my widow, sorry – but we find ghoulish humour helps."

* in the past, delighted fans with his prolific output under two names and outraged literary puritans with his blithe assertion that he aimed to devote no more than three months a year to writing, because there were so many more interesting things to do – like driving fast cars and playing with fancy technology.

*  discovered a back problem he had ascribed "to the fact I'd started writing at the beginning of January and so was crouched over a keyboard all day" was something much more serious.

* said : "When it hadn’t gone away by mid-February, I went to my GP, who spotted that I had jaundice. Blood tests, an ultrasound scan and then a CT scan revealed the full extent of the grisly truth by the start of March."

* stated : "I have cancer. It started in my gall bladder, has infected both lobes of my liver and probably also my pancreas and some lymph nodes, plus one tumour is massed around a group of major blood vessels in the same volume, effectively ruling out any chance of surgery to remove the tumours either in the short or long term."

* intended : "to spend however much quality time I have left seeing friends and relations and visiting places that have meant a lot to us".

* was interviewed for 5 minutes, before his diagnosis, last November : https://www.youtube.com/watch?v=JdEK9USa_7w 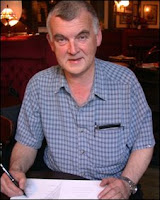 ‘Just saw the sad news. Wasp Factory, Walking On Glass, Crow Road – some of the best novels I’ve ever read.’

"The way Iain has reacted to his situation is not really with a sense of unfairness but more that it's just the way the universe works, the way matter works, that there's nobody out to get us, nobody to blame for it all. It's a very courageous and stoical attitude in his situation. There's no doubting the style of the man. What you see is what you get, and the Iain who comes across in his books is very much how he is." 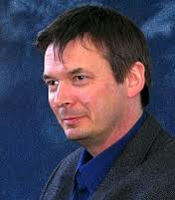 Ian Rankin, creator of the archetypal Scottish detective Inspector Rebus said :
"That combination of the macabre with the comedic is something he pulled off time and again in his fiction. He's taken it with good grace and humour and stoicism. I hope I have the chance to have that drink with him in Edinburgh."