Britain is a country with an organisation called Relate which helps old men work on relationships before they become lonely 'silver separators'.

They are in the news again, the old 'silver splitters or separators'.  I posted this about them last year :

Britain is a country for more and more divorced old men, 'silver separators' with a lust for life http://britainisnocountryforoldmen.blogspot.co.uk/2012/12/britain-is-county-for-more-and-more.html

This time, however, the relationship support organisation, 'Relate',  has produced a report in which it is less  optimistic and has called for the appointment of a new 'Minister for Ageing Society' as four million old men and women face the bleak prospect of a lonely old age.

How do you and your other half enjoy each other's company?
A
We're interested in the same stuff and regularly have
fun together.
B
We don't share many interests but the ones we do are really important to us.
C
We lead pretty independent lives and I wish we could do more stuff together that we both enjoy.
D
We've been drifting apart for a while and I don't really feel like doing things together.Ö

How close are the two of you?
A
I'd describe my other half as my best mate. We're always
in touch and there's nothing I wouldn't or couldn't chat to
them about.
B 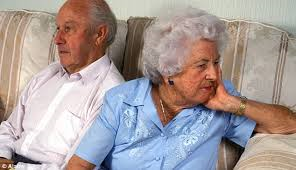 Most of the time we're close, but we do sometimes get distracted by everyday stresses and have to try hard to make time for each other.
C
We don't talk about personal or emotional stuff very often.
It's more of a practical relationship.
D
I don't feel very close to my other half. We don't really talk about anything other than the essentials. Ö


How would you describe
your sex life?
A
We both feel the same about sex and enjoy it.
B
Most of the time we enjoy sex, but we can sometimes fall out about it as our needs can be different.
C
We both think differently about sex and it often
causes arguments.
D
I don't enjoy sex with my other half. Ö


How do you go about
resolving arguments?
A
We hold our hands up and admit our faults, then focus on finding a compromise that suits us both.
B
We can get angry and upset when we disagree on something, but after a while we make up and find a solution.
C
When we disagree on something, one or both of us usually gets really upset or angry. Sometimes we give up trying to sort it and end up arguing again.
D
We don't bother disagreeing about anything anymore – it's just not worth it. Ö
Have you got plans for the
future together?
A
We have lots of shared plans for the future that we're both really looking forward to.
B
We have different plans for the future but we support each other in whatever we want to do.
C
Most of our plans are the same, but there are some things we disagree on that worry me a little bit.
D
We tend to take it one day at a time and don't talk about what we want in the future. Ö
For those old men who take the test and answer and answer 'D' to each question, Relate says :
So how did you do?
Congratulations! Your relationship is looking nice and healthy. Either you're still in the at-it-like-rabbits stage, or perhaps like many, you've discovered relationships take time, commitment and plenty of talking – and you're reaping the rewards.
Just the fact you've done this checker proves you don't take your relationship for granted and you want to keep improving things. If you fancy making it even better, have a look back at the questions, figure out where you didn't score top marks then go about fixing it.
Oh, and If you really want to impress, why not take a look at our workshop and courses section over at www.relate.org.uk
Good news! On the whole your relationship is in pretty good shape. You may have a few differences, but you're able to respect each other and work through them. If you don't already, it might be worth spending more time focusing on the good things you share together to make sure they outweigh any niggles.
We've got a wide range of books to help you enjoy a healthy, happy relationship. Visit our bookshop section at www.relate.org.uk
Ok, so you might be finding your relationship often feels like a struggle. There is still some good stuff, but there are a quite a few things that can cause arguments or distance between you both. You might find it helpful to go back through the earlier questions and highlight the areas you think are most important to work on – either on your on or with a Relate counsellor.
If you are finding things are difficult in your relationship, you can always get free online and immediate support from our LiveChat service at www.relate.org.uk
It looks as though your relationship is going through a pretty rough time at the moment. Perhaps it's just a blip because one or both of you is under pressure elsewhere in your life, or maybe it's been this way for a while now. Either way, you'll probably find it helpful to put some time aside, either alone, with your partner or with a Relate counsellor. It's important to think about the changes you'd like to make to improve your relationship.