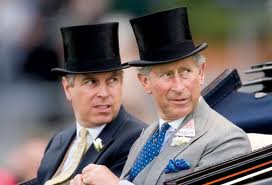 Britain's unelected Prince Andrew, the 'oldish' Duke of York is 53 years old and his brother, Charles, is 64. Both these men from the House of Windsor have recently drawn unwanted criticism, Andrew for his decision to post himself on Twitter and Charles for the decision made, with his approval, not to publish his letters, in which he has expressed his personal views on various subjects to  Government Ministers. Andrew launched himself on Twitter last week with a tweet : 'Welcome to my Twitter account – AY' which produced :    * 'Has your account been hacked by Ali G?'series of jokes from fellow users who thought he was copying comedian Ali G’s catchphrase “Aiii”.    * 'Yo how’s Jeffrey Epstein?'  referring to the Duke’s relationship with a US billionaire who was jailed in 2008 for soliciting a minor for prostitution.
* jokes about the Duke of York needing '10,000 men to march up the hill' in a reference to the nursery rhyme.

* 'Don’t suppose you could pass a message to the powers that be about having an elected head of state ?'

A spokesman for Andrew said:
“The Duke has long been an early and enthusiastic adopter of new technology. He was the first member of the Royal Family to tweet on the British Monarchy (account). The logical next step was to tweet individually.” Asked about the derogatory tweets to Andrew, the spokesman added:
“The Duke is a champion of free speech, for him it’s about telling people what he’s doing.”

Within hours the Duke had attracted more than 10,000 followers on the social network.

It is particularly interesting to note that most of those he had chosen to 'follow' were  organisations he had worked with before, but his personal interests were reflected, too, in his following of 'Hunstanton Golf Club' in Norfolk and the 'Royal Liverpool Golf Club'. Apparently, the Prince is a keen golfer with a low handicap and became patron of the Hunstanton links after his father, the Duke of Edinburgh, relinquished the role.
One Twitter account he has yet to follow was that of his ex-wife Sarah, Duchess of York, who tweets using the handle @SarahThe Duchess.  With 62,130 followers, she has a headstart on him in terms of follower numbers.
Andrew is no stranger to criticism which in the past has focused on :

* him using the royal train for golf trips.

* claims he told a valet to "f-off" for opening his bedroom curtains too early.

* his meetings with dodgy arms dealers.

If Andrew was in the news last week it was the turn of brother Charles this week and his attempts, behind the scenes, to change Government policies and specifically his letters to Ministers known as 'black spider memos'.

Last autumn, a Freedom of Information tribunal of three judges ruled that they should be published for "transparency as to how and when Prince Charles seeks to influence government".  Even as he vetoed the judges' decision, the Attorney General, Dominic Grieve, admitted that the 'advocacy correspondence' showed the Prince disagreeing with government policy, however, to preserve the fiction that the future monarch is politically neutral,  he demanded the letters be kept secret. Government advisers have described in court how such royal memos went to the "top of the pile" and were "treated with great reverence".
The decision led to letters of criticism in the Guardian newspaper which has been an advocate of publication in the national interest :

*  'Regardless of whether it succeeds in securing their release, however, the key point is already clear. As the Attorney General himself admits, the heir to the throne has acted in a way that would be likely to undermine confidence in his political neutrality were he to become king. The only way Clarence House can now draw a line under the issue is to announce that the lobbying activities apparently revealed by the letters have ceased and will not be resumed. This would at least suggest the existence of a learning curve in the prince's preparations for the role of constitutional monarch.'
Professor Philip Murray, Director, Institute of Commonwealth Studies, University of London

•  'It becomes clearer and clearer that our country is ruled as much by back-door influence as by the democratic process.....Charles is not the only wealthy pretender who influences this government, just the sorry public face of a sanctimonious, hypocritical and unelected old boys' network who believe they have the right to influence and dictate national policy without any accountability to ordinary people.'
Kay and Barrie, Ellesmere, Shropshire

'Our constitution rests on the key principle of monarchical neutrality, a position, it appears, he would find hard to maintain. The people – the other partner in the constitutional relationship – have the right to know this. The attorney general therefore surely has a duty not to block publication of the letters.'
Gillian, London.

Labels: No country for Princes Andrew and Charles