Brian musician, singer, songwriter and astrophysicist who achieved international fame as the guitarist of 'Queen' is 66 years old today.

* was an only child, grew up in Hampton in London, his father was a draughtsman at the Ministry of Aviation and at school he formed his first band called 'Nineteen Eighty-Four'.

* left school and studied mathematics and physics at Imperial College London graduated and when he was 21, formed the band 'Smile' which contained drummer Roger Taylor. 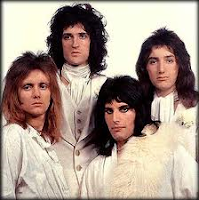 * at the age of 24, with Roger, joined Freddie Mercury and John Deacon to form 'Queen' went on to write, among other songs, 'We Will Rock You'
http://www.youtube.com/watch?v=iikKzQwgBJc and 'I Want It All'.

* after the 'Live Aid' concert in summer 1985, was phoned along with his band mates by Freddie who proposed writing a song together and the result was 'One Vision', with Brian on music, Roger on lyrics and Freddie as producer and arranger.
http://www.youtube.com/watch?v=0_1IMZmJe-U

* has stated in interviews that he suffered from severe depression in the late 1980s and early 90s, even to the point of contemplating suicide, for reasons related to  his troubled first marriage, perceived failure as a husband and father, his father's  death and Freddie Mercury's illness and death in 1991 which he chose to deal by working hard, first by finishing his solo album, 'Back to the Light' and then touring worldwide to promote it.
https://www.youtube.com/watch?v=qJuOxeMNqik

* has worked extensively with stage actress and singer Kerry Ellis after he cast her in the musical 'We Will Rock You'.
With Kerry Ellis in Hyde Park in 2010 :
http://www.youtube.com/watch?v=kkGG_qQ_2Jw 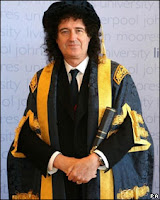 * earned a doctorate in astrophysics from Imperial College in 2007 and is currently the Chancellor of 'Liverpool John Moores University' after being awarded an honorary fellowship for his contribution to astronomy and services to the public understanding of science and with duties of presiding over graduation ceremonies and representing the University on special occasions.

* appeared on the 700th edition of the tv programme,'The Sky at Night', hosted by Patrick Moore and on which the Astronomer Royal, Martin Rees, said: "I don't know any scientist who looks as much as like Isaac Newton as you do" to which Brian said : "that could be my after dinner comment, thank you very much".
http://www.youtube.com/watch?v=bB55tp7rE64

* in 2009, published a book entitled 'A Village Lost and Found: Scenes in Our Village', a collection of stereoscopic photographs taken by the Victorian photographer T. R. Williams and sold with a stereoscope.
http://www.youtube.com/watch?v=UMzcU6CIh8U

* formed a group called 'Save Me' to promote decent treatment for animals with a particular emphasis on preventing hunting of foxes and the culling of badgers and said in an interview in 2010 that he "would rather be remembered for his animal rights work, than for his music or science" and this year joined fellow French guitar player Jean-Pierre Danel for a charity launched for the benefit of animal rights in France.
http://www.youtube.com/watch?v=weaHRi63NXM

* was ranked at number 39 on the 'Rolling Stone' Magazine's list of the '100 Greatest Guitarists of All Time' and will be immortalised by playing in 'Bohemian Rhapsody'.
https://www.youtube.com/watch?v=kIp5QC8Reso