Noel Conway is a 67 year old retired college lecturer who has amyotrophic lateral sclerosis, a form of motor neurone disease and says he fears becoming "entombed" in his body as his muscles gradually weaken. He wants a doctor to be able to prescribe a lethal dose when his health deteriorates. The problem is that Members of Parliament rejected the last attempt to introduce 'Assisted Dying' in England and Wales in 2015, so he has taken his case to the High Court to challenge to the existing law. His will also be the first such case since 'Right-to-Die' campaigners lost their appeal before the Supreme Court in 2014.

Noel is being backed in his legal bid by the campaign group, 'Dignity in Dying' and its Chief Executive, Sarah Wootton, has said : "Noel's experience sadly echoes that of hundreds of other terminally ill people in this country - choice and control at the end of life is something that everyone should be able to have."

Backing the retention of the status quo, the disability rights campaigner, Baroness Campbell, said the current law, the 1961 Suicide Act, was already compassionate and changing it would be "highly dangerous. Disabled people want to be valued by society and would see any legal change as a real threat."

Noel has been given a life expectancy of less than 12 months. He used to enjoy physical activity, climbing, skiing, walking and cycling, but at the moment is dependent on a ventilator overnight, requires a wheelchair and needs help to dress, eat and with personal care. His fear is that he will reach a stage where he is entombed in his own body as his ability to move gradually reduces which he says "would be unimaginable."

Noel has signed up with Swiss suicide group, 'Dignitas', but is concerned that when he is ready to die he might be too ill to travel. He said: "I want to live and die in my own country. The current law here condemns people like me to unimaginable suffering - I'm heading on a slow, slippery slope to hell."

In order to convince his country that he should be assisted in his suicide he is seeking a judicial review of the 1961 Suicide Act, which makes it a criminal offence punishable by up to 14 years in prison for anyone in Britain to assist in a suicide in Britain. Noel's lawyers will seek a declaration that this is not compatible with the 'Human Rights Act 1998', which confirms that individuals should have respect for a private and family life. 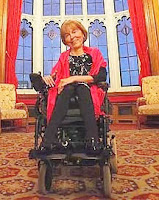 Noel's case, which is expected to be heard at the High Court within a few months, will reopen a debate which has impassioned voices on both sides. In opposition to him and his lawyers is Baroness Campbell, who has spinal muscular atrophy and founded the organisation 'Not Dead Yet.' She uses a powered wheelchair, is fed through a tube and can now move only two of her fingers but thinks that : "If the law was changed it would feed into society's fear that being very disabled like me is a state worse than death. We already have to fight to live; a right to die would be a huge and frightening burden."

Supporting Noel's case, Sarah Wootton said that the Government had "ignored the pleas of terminally ill people" and "Britain was being left behind". She refers to the fact that Canada, California and Colorado all introduced assisted dying in 2016 and later this year the Government in Victoria, Australia, plans to introduce legislation to allow doctors to help the terminally ill to die. Noel himself has said : "Other countries have shown that assisted dying can work. It's been happening in Oregon for 20 years. I want to ensure that terminally ill people like me don't have to suffer, and have a choice about their death."

He is not in any pain at present, but Noel fears what would happen in his final weeks and that he might die by suffocation or choking. He said : "I have a right to determine how and when I die and I want to do so when I have a degree of dignity remaining to me."

At the moment the law in Britain disagrees with Noel and he remains condemned to his "slow, slippery slope to hell."

Noel speaks for himself : https://www.youtube.com/watch?v=FepZjuvzHC4

Labels: No country for Noel Conway