Graphic designer, Chris Barker has created a collage, using the Beatles’ Sgt. Pepper’s Lonely Hearts Club Band album cover, designed to pay homage to the passing of celebrities the world lost in 2016. His creation included images of 17 famous old Brits, who collectively lived for over 1,300 years.

Chris, who has donated his image, without profit, to the world, has asked that those who see his work, consider donating to a charity of their choice or the 'Jo Cox Memorial Fund', which honours the British MP who was murdered before the Brexit vote in 2016 by a man with white-supremacist ties.
https://www.gofundme.com/jocox 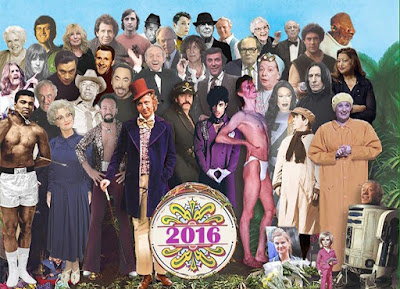