Britain is still a country for and says "Bravo" to an old flier, doctor and member of McIndoe's Guinea Pig Club called Sandy Saunders

When 94 year old Sandy took to the skies in a Second World War Tiger Moth last year, he knew that, because he is suffering from terminal cancer, it was likely to be his last flight.
https://www.youtube.com/watch?v=0P4eIjFmHeI

Sandy was born Arthur Courtney Saunders in 1922 and was 17 years old when the Second World War broke out in 1939 and two years later was a Rover Scout volunteer in a Rescue Squad in Liverpool, when in May 1941, the city was devastated by 680 German bombers and 1746 civilians were killed. He recalled that he was "helping to dig out people in bombed houses when a scream of bombs made me throw myself flat on the ground, escaping with shrapnel wounds to my legs and buttocks. After two weeks in Ormskirk Hospital, during which I found myself giving thanks for surviving a near miss, I learned that I had been picked up only a short distance from the edge of a crater, one of a stick of five. The same night, my mother had coped alone with an incendiary bomb which had come through the roof."

At the age of 21, in 1943, he was enlisted to serve in the Army and, as he recalled, after two years with the Royal Electrical and Mechanical and Engineers as a young officer  "looking after gun-laying radar on anti-aircraft gun sites I was so impressed by the bravery of the troops at Arnhem and at Pegasus Bridge that I volunteered to transfer to The Glider Pilot Regiment."

It was after flying and battle training, when he was undertaking a conversion course to gliders, that disaster struck. As he recalled : "The 27th September was a very important day in my life. I hit the ground rather violently and this was my inferno. I was covered with aviation fuel and I was on fire. I got horrid burns on mt entire legs and my hands and my face."

Sandy still has nightmares about that day. He and a colleague were flying in a Tiger Moth over RAF Gaydon in Warwickshire, with him piloting and attempting to navigate a tricky crosswind to climb over a bank of trees, when the  plane stalled, then screamed down to earth. “Suddenly, there is this feeling of terror. It dawns on you that you have only a few seconds before you die.” On impact with the ground, Sandy was knocked unconscious and his navigator was killed. When he came to, he was on fire. “Survival instinct kicks in, and somehow I managed to unbuckle my harness and climb out of the plane. The next thing I remember I was in hospital.”

Sandy awoke swaddled from head to toe in bandages. Some 40% of his body had been burnt. His mouth, nose and eyelids had all turned to a crisp and he could only be fed through a tube. His injuries were so severe that he faced the prospect of a life with disfigurement in which he would be left to cope with the consequences. Sandy didn't see anything for a few months. His burnt eyelids were replaced with skin from his upper arm, but his legs had been burned from his thighs down to his ankles and "the skin was tight over my knees - I couldn't bend them."  After three months he recalled : "being taken to the bathroom for the first time and seeing my reflection in a mirror. I was amazed. I was horrified. It was a tremendous shock. Such disfigurement at the age of 21 was hard to bear" and he was "very depressed." 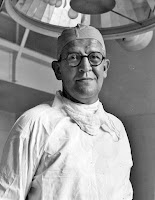 After a number of operations at Birmingham, he was sent back on duty as second in command of a prisoner of war camp near Derby, but his eyelid replacements shrank and he could not close his eyes. It was now that he had the good fortune to be given an appointment to go and see the revolutionary burns surgeon, Archibald McIndoe, at a Queen Victoria Hospital in East Grinstead. He was now in the hands of a New Zealander who had moved to Britain before the outbreak of war and had gained a reputation for working miracles with burns victims and was seeking out the very worst cases from hospitals across Britain.

Sandy recalled that McIndoe looked at him, held his hands and said : "You need four new eyelids, your nose needs rebuilding and your eyebrows need to be done. Come in tomorrow and I will do your upper eyelids." He recalled : "His character was such that you felt immediate confidence in him. He gave recommendations in a firm voice that you automatically accepted as the right course."

From that point forward Sandy had become a life member of the 'Guinea Pig Club' and to this day wears its small gold pin on his blazer which "shows I am a member of one of the most exclusive clubs in the world, because you have to have been nearly burnt to death to even apply.”

The brilliant McIndoe, whose staff referred to him as 'the Boss' or 'the Maestro', had devised a philosophy of his own making based as much on mental rehabilitation as physical repair which taught his patients to have no shame in their injuries. Inside Ward 3, he installed a barrel of beer, recruited the prettiest nurses and allowed his patients to wear their uniforms instead of the normal blue dress after he had insisted : "not in my hospitals. They'll wear the uniforms they were knocked out in", but not, apparently, until after he got clearance from Prime Minister Churchill himself.
https://www.youtube.com/watch?v=m-Hrrp0ktlY&t=20m26s

At the end of a hard day's operating he'd come onto the ward and play the piano for an hour before going home and insisted his patients, who he called 'His Boys', face the world and regularly sent columns of men swaddled in bandages into East Grinstead to visit the pub, local cinema or music halls. It became known as 'The town that did not stare'.

The Guinea Pig Club has its own song which made reference to French, Czechs, Poles, Yankees, Canadians and 'mad Australians'
and began with :
"We are McIndoe’s Army,
We are his Guinea Pigs.
With dermatomes and pedicles,
Glass eyes, false teeth and wigs.
And when we get our discharge
We’ll shout with all our might:
"Per ardua ad astra"
We’d rather drink than fight." 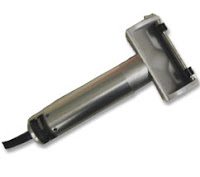 The 'dermatome' in queation was a surgical instrument used to produce thin slices of skin from a donor area, in order to use them for making skin grafts and the 'tubular pedicle', invented by Harold Gillies and developed by McIndoe, was where skin and soft tissue was used for a flap and shaped into a tube, for a new nose for example, which reduced the chance of infection before the use of antibiotics. The Latin "Per ardua ad astra" or "Through struggle to the stars", the motto of the Royal Air Force and other Commonwealth Air Forces.

Sandy's course of treatment lasted three years and involved 14 reconstructive operations. Many years later he reflected : "I did go through a phase of being horrified, ashamed and miserable that I looked so awful. Gradually that was overtaken by pride in being a Guinea Pig; one of the boys, with the marks of war. This face has taken me through life and I feel pretty normal."
https://www.youtube.com/watch?v=3wUvSEB6Q40

After he was demobbed from the RAF at the age of 25 in 1947 he felt fir to face the world, but would carry another permanent scar with him into civilian life when he recalled that his navigator "must have been killed instantly and I have been grieving for him ever since." 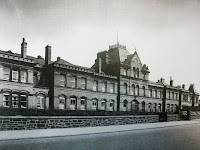 Sandy's way forward was now clear :  inspired by watching McIndoe operate and seeing his work result in the restoration of so many burned airmen to a state of physical and psychological well being that would allow them to lead useful lives, he determined to follow a career in medicine and enrolled to study a medical degree at Liverpool University and qualified as a doctor in 1952. Then, after a series of house appointments at Liverpool Stanley Hospital, he became a general practitioner in Nottingham where he was to spend the rest of his professional career. Despite the magic of McIndoe's surgery, life wasn't easy for Sandy. He recalled that, in an anatomy class one of the students felt nauseous and had to leave the room. Twenty years later at a reunion dinner, she confessed the reason she did this was that "she felt physically sick and had to go to the ladies and vomit because she was so horrified by my appearance, And this was from a doctor."

In the second half of his career Sandy developed a special interest in psychiatry and obstetrics and in and undertook training in hypnosis and gained a 'Diploma in Hypnosis' at the University of Sheffield and became a member of the 'British and the International Societies of Hypnosis.' 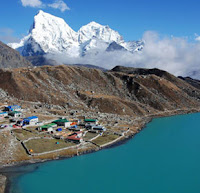 After retirement from medical practice, Sandy served as doctor in a trek in 1990 in the Khumbu Region on the Nepalese side of Mount Everest, trekked, at the age of 76, in the Annapurna Sanctuary and in the Langtang is a region in the Himalayas of Nepal to the north of the Kathmandu Valley and bordering Tibet in 2000.

At sea, he was a crew member in a  a six-man boat for his 80th birthday, in the Atlantic Rally for Cruisers Las Palmas to Saint Lucia in 2002 and over the years, form time to time, has enjoyed skiing and golf.

Sandy has said of the Guinea Pig Club : "Initially the Club was intended to be a drinking club, which would disband at the end of the war. However it grew in strength from year to year and has remained as a club of group support throughout the members' lives, which has helped them to go on to lead normal, useful lives." He paid tribute to his fellow servicemen when he said : "I am thankful for the huge moral uplift I received from my fellow patients who I regard as the bravest of the brave. One of the benefits of surviving a serious threat to life is that one never again worries about trivialities."

Last year Sandy led a fund raising campaign to have a memorial installed at the National Memorial Arboretum, in Staffordshire to mark the 75th anniversary of the Club's founding It was was unveiled by the Duke of Edinburgh, the Club's President and it seems entirely appropriate, to the life and work of Sandy, that the memorial is inscribed with a motto he created :

'Out of the flames, came inspiration'. 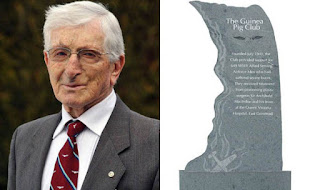 
"The human instinct is that good comes from something bad. That is what happened to me."