Britain today in 'A Tale Of Two Cities'. 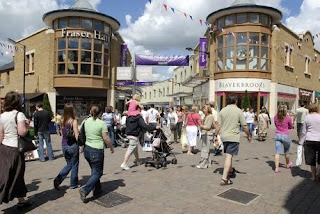 Maidstone, the County Town of Kent, is descibed in a Tourist Guide thus :
'The town has a colourful past of revolts, battles, industrialist brewers and more. Being ideally located between London and Dover, the town was the chief route for pilgrimages and a busy centre for local and national trade.
The economy of the town has changed from heavy industrial to light industry and now towards service industries. Maidstone has a number of nightlife options like the nightclubs, bars, contemporary music, opera and theatre.
The town has a population of 75,070 inhabitants'. 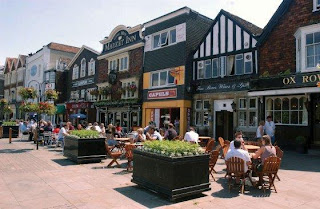 Salisbury, on the other hand , 'is a serene cathedral city in Wiltshire, England and forms a major part of the Salisbury district known as New Sarum. Located in the basin of the River Avon, the city is a scenic region with many sacred sites. The region has approximately 45,000 inhabitants.
Historically, the city finds its origins in the Iron Age; Sorviodunum was its earliest name. The city was an important region owing to its location. Today, the city has a strong economy consisting of agriculture, biotechnology and tourism'.

Now have a look at the stats in the links below :
http://www.statistics.gov.uk/census2001/pyramids/pages/46ud.asp

This one shows that, Salisbury with its solid Middle Class base, has a greater number of old men and women at 65+, than the National Average.
And now Maidstone :
http://www.statistics.gov.uk/census2001/pyramids/pages/29uh.asp

This one shows that Maidstone, which is without a solid Middle Class base, has roughly the same number of old men and women at 65+ as the National Average.

Conclusion :
The length of your life depends upon the class you belong to, which dictates where you live, the quality of your health care, what you eat, e.t.c .....e.t.c.