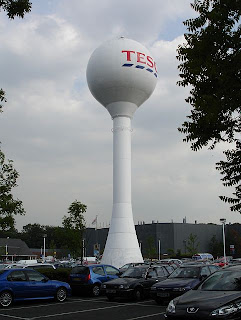 I made a posting on this blog on July 22nd in which I described how I could not get a refund on some rotten cat food. I said then that it was something very small which tells us a lot about something very big - the Tescos Supermarket chain which made a profit of £3.13 bn or £3,130,000,000 last year.

Well, today I can reconfirm what I said back in July.

This time I bought 3 cartons of soup which were flagged up at £1.00 each, reduced from £1.97. It was only when I got back home and checked my bill that I noticed I'd been charged at the old price. The petrol I would use to get back to the store would probably amount to the refund, but there was a principle involved here.

I went to 'Customer Service', a misnomer if ever there was one. I'll go through the rest, step by step :

1. I had to take the 'assistant' back to the shelf where the soup was sold and show her the label which indicated the reduction.

2. The 'assistant' removed the label and we went back to her counter.

4. I was then told in no uncertain terms that, I "should have brought the soups back". So it was now me, who was remiss and placed in a position where I had to apologise to Tescos.

5. After a lot of fart arsing around, the 2 'assistants' who were now working on my case managed to get me a refund of £3 instead of £2.91 due to me. Thank you Tescos. So generous - you gave me 9 pence for my inconvenience.

6. I took the receipt for the refund and, needless to say, no apology was proffered.