Britain's Old Men you have a champion in Joan Bakewell 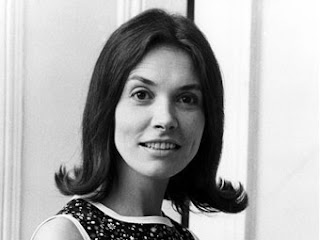 Joan Bakewell as she was in 1968 and at the time when the raconteur and humorist Frank Muir christened her : " The thinking man's crumpet." She was a trailblazer, the Stockport girl who left grammar school to read Economics and History at Cambridge before a glittering career in broadcast journalism, at a time when the medium was largely populated by middle-aged men Old Etonians.

Her 2003 autobiography, 'The Centre of the Bed', deals in anecdotes from her very ordinary beginnings, to her dazzling, Swinging Sixties, when she had a seven-year affair with playwright Harold Pinter and rose to prominence in the media.
She talks about the book in the link below :


In the Summer of 2008, she was made a 'Dame Commander of the Order of the British Empire' a 'C.B.E.' In November of that year she took up a Government appointment as 'Voice For Older People'. She is now 75.

She said :
" I figured I could be a good voice for older people because I'm known by the media and therefore accessible. But I said I would do it on my terms – not as a government job, but giving voice to what people think and want, answerable to my constituents. It has quickly become a crusade for me, and involves looking at all public policy in the light of how it will affect older people."

" I get many letters from people about all sorts of things, including their bladders and the terrible lack of public loos. Then there's housing and the pension crisis that's evolved ever since Mrs Thatcher unhooked pensions from the cost of living. Pensioners' groups are right to be so angry".

"There are a range of health and care issues, and end of life and assisted suicide. People write to me a lot about their fear of dying, and how they will be treated at that time."

One malaise, as Bakewell sees it, is that we are so terrified of old age. "It's a nasty place to go, and people don't want to think about it before they have to. But a wee bit of planning while still in middle age can make a big difference. Fitness and health in middle age help to govern what kind of old age you will have."

Does she feel anybody is listening?

"Yes, I think so. Why else would they have asked me? I don't just go and schmooze, you know."

It is clear why she was the natural choice for this role. She'd written a number of newspaper article, about elderly people, mostly in the 'Times', before she took on the job.

'Grandparents are left out of the family picture too often'
'NHS Bias Against Elderly People Is Quite Outrageous'
'Three cheers for a Bill of Rights for the old, gay, disabled, female and taken-for-granted'
'Care for the elderly is meant to be about sympathy, not money'

And after the appointment in the Times, Gaurdian and Independent :

'Care homes: Options running out in struggle for high standards'
'Lack of overnight care adds to fears of the elderly'
'Ageism, pensions and the end of high heels - it's time I spoke up'
'Joan Bakewell: Alzheimer's research can no longer be sidelined'
'Joan Bakewell: I've seen the future, and it belongs to the old'