Britain is a country where, in the present financial climate, some young men do not love old men 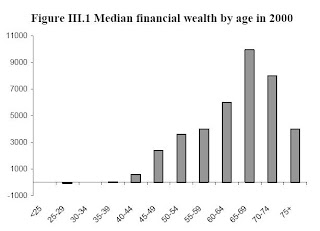 An article appeared in 'The Financial Times' last week, written by a political journalist and no doubt young man called Alex Barker and entitled :

'Cameron: fair pain for all except the elderly'

* Prime Minister Cameron is warning that every individual will be hit by the coming financial cuts in Government spending . However, because of the 'Coalition Agreement', 'the elderly will be given a free ride at the expense of everyone else'.

* There is hardly a perk left for over 60s, the most wealthy section of society, that hasn’t been protected by the Coalition.

At this point a chart was added showing the relative wealth of the over 60's.

* Older people will feel 'some indirect pain through withdrawal of some public services', they may however, be the one group in society that does not take a direct hit to income over the next five years.

* Old people, because they were the ones most likely to vote, were, regardless of means, the big winners of the General Election. 'Most of them benefited from the great British property bubble and now will ask their children to pay for the fiscal fallout'.

– Free bus passes for the over 60s. This perk costs just £1bn a year, which is an eighth of what we spend on the railways.

– Free TV licences for those over 75. 'Essential at a time of swingeing budget cuts. Cost: £600m (more than the child trust fund which has been scrapped).'

– Restoring the earnings link for the state pension from 2011 because the Coalition promised that pensions will always rise by at least 2.5 per cent — 'even if everyone else’s earnings drop below that'.
– Protecting winter fuel payments. 'A £2.2bn give-away to all 60 year olds, whether they need it or not. '

– No changes to the default retirement age for anyone over 60. The retirement age will be increased. But not until 2016 for men and 2020 for women. 'The move will make all those who paid for perks for the over 60s work even longer. That’s justice for you'.

– Real terms increases in National Health Service spending. The service that old people rely on most will be spared from budget cuts. 'Oh, and don’t forget the free eye tests and prescriptions.'

Among the letters from the public which the article generated my favourite was :