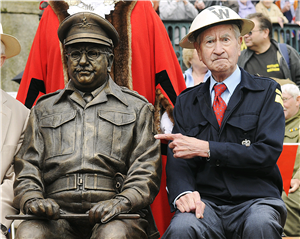 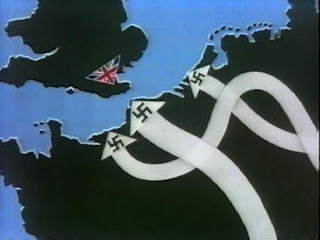 The television series 'Dad's Army' ran for 78 episodes between 1968 and 1977. It was written by David Croft and Jimmy Perry and based on the Second World War 'Home Guard' platoon at the mythical south coast seaside town of Walmington-on-Sea.

Home Guard units consisted of men who were too old for active service but were trained to defend their areas in the event of a German invasion.
The strength of the series lay in its wonderful characterisations of the different guards within the unit and the scriptwriters evocation of that gentler 1940's England of what was then 30 years ago and is now 70 years ago.

A statue of Captain Mainwaring from the BBC series Dad's Army has been unveiled in the Norfolk town where many of the scenes were filmed.

The life-size bronze cast of the character, played by Arthur Lowe, is seated on a bench by the Old Anchor Hotel in Thetford.

Bill Pertwee, who played Warden Hodges in the series, was among those who returned to the town for the unveiling.

David Croft said he thought the statue was “absolutely marvellous” and was a “frightening” likeness of the Walmington-on-Sea Home Guard Captain.

Here are the opening credits for each programme :

And my favourite scene : "Don't tell him Pike' :