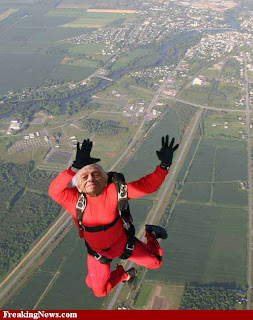 Eric Jones, 73, from North Wales, goes skydiving at least 10 times a year. He credits his active lifestyle with keeping his mind sharp and has said:
“Extreme sports have helped me keep young in the mind. There’s an edge to sporting activities — you have to be totally focused. My ability to think on my feet and my long-term memory have certainly improved with age.”
For the sake of accuracy, the old man in the photo isn't Eric.

* Far from losing mental abilities with age, scientists have discovered people can carry on boosting them with a little exercise and that the brain can improve with advancing years, dispelling the common belief that a person’s mental faculties peak in their twenties.

* While short-term memory and the ability to reason may decline with old age, researchers found that long-term memory remains unaffected and a person’s vocabulary, emotional intelligence and social skills may all get better.

* Scientists in America now say that three 40-minute walks a week can improve memory and reasoning, while mental stimulation can improve problem-solving and reaction times.

* Dr Peter Connelly, an 'Expert in Old Age' at the 'Royal College of Psychiatrists' has said :
“An older person’s judgment of things can be exceptionally valuable because they have more experience and with it the ability to think through things much more logically and sensibly. Where a young person is jumping all over the place looking for solutions, older people can draw from experience.”

* Older minds are dominant in many areas of British society. Two-thirds of chief executives of FTSE 100 companies are over 50 and in the new British Coalition Government, Vince Cable, the 'Business Secretary', is 67, and Ken Clarke, the 'Justice Secretary', is 69.

* Judges are pressing for a change in the law to allow them to remain in post beyond the age of 70. Lord Woolf, 77, the former Lord Chief Justice, said compulsory retirement was a “huge waste” of talented minds.