Britain is a country with more and more lonely old men 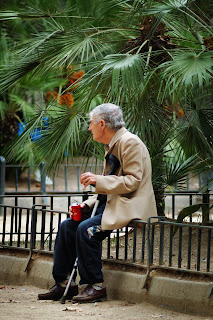 An article appeared in the 'Times' last week entitled :

How half million lonely old men are paying price the divorce boom.


The story was based on a report by the charity 'Help the Aged'. It found that these old men lead lonely lives with no friends and no contact with their families and many feel trapped inside their homes.

* one person in five or with an elderly father is no longer in touch with him. One in four claims to be too busy to maintain contact.

* 'Divorce and family break-up has left millions of men without ties to their children and with few or no family links'.

'We are seeing the first real wave of the 'divorce generation' hitting retirement'.

'As fathers were typically the parents who did not win custody of the children, many are entering later life with strained family ties'.

'Today, around half the number of older men living alone are experiencing some form of loneliness or isolation.'

'Nothing can substitute human contact to combat isolation and loneliness'.

* Retirement deprives many of the company of work colleagues and others are left alone by by bereavement or their own poor health.

* The number of divorces tripled in the early 1970s after the liberal reforms of 1969 made 'quickie' decrees available for the first time and removed the question of fault in many cases.

* Men who divorced in the early 1970s while in their mid-30s will now be 70 years old and many have lost all contact with children who would otherwise be close to them.

Here are two of the letters sent to the paper :

' Well, they were warned, weren't they, time and again. Divorce and you will as like as not lose touch with your kids. Of course some of the men won't have been at fault at all in the divorce and I am very sorry for them, but for those who were at fault and simply abandoned their family or were pushed out due to violence or womanising or whatever, serves them right. I would say exactly the same to any woman in the same situation. You make your bed, you lie in it'.

' Can't these guys have an association and get together for friendship? Alternatively, they can get much younger wives and girlfriends, spend lots of time in sunny climbs and suffer no stress due to being forced to listen to some old boot constantly moaning. Of course the other alternative is to stay married, work yourself to a frazzle and die before the trout and leave her all of your assets. I know which I would pick'.
Posted by ...............................JohnBoy at 00:15