Britain is a country where a father called Tariq Jahan speaks with the voice of an old man about a young son, now dead 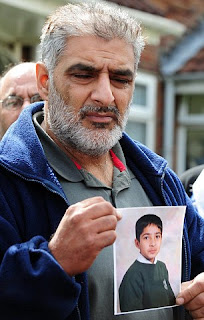 Tariq Jahan is 45 years old, but when he spoke movingly and with great dignity, in public, about the murder of his 21 year old son, Haroon, he spoke with the voice of a very sad, very old man.

Haroon was one of three young Muslims who died after they were thrown into the air when they were hit by a car which mounted the pavement at 50mph while they were trying to protect local shops from looters in their district in Birmingham on Tuesday night.

The killings constituted the worst incident in four nights of rioting across Britain. Local people claimed that Afro-Caribbean gangs had been prowling the area, setting light to cars and shouting at Muslims ‘you will burn’ just before the alleged murders.

As racial tensions rose to boiling point with some Muslims calling for ‘retribution’, Tariq, who desperately tried to revive his dying son, urged people not to seek revenge.

Standing on a wall in front of a crowd he said:

"I lost my son. Blacks, Asians, whites – we all live in the same community.
Why do we have to kill one another? Why are we doing this? Step forward if you want to lose your sons. Otherwise, calm down and go home – please."
http://www.youtube.com/watch?v=OAXv5CRocvg

The context of the killings was that :

* tensions were already running high in Birmingham on Tuesday when hours before the three men died a 39-year-old woman, Rashida Ahmed, was attacked by a gang of 12 black men in the Alum Rock area of the city.

* Haroon and Shazad Ali, 30, and his brother Abdul Musavir, 31, had left their Mosque after evening prayers at 11.30pm on Tuesday.

* the three were standing in Dudley Road to protect local businesses from looters when a speeding car, allegedly deliberately, swerved into them.

* Haroon’s cousin, Ali Hussain, said the killings were part of simmering race problems in the area and warned militant members of the Asian community were planning to launch ‘retribution’ attacks on the black gangs.

It was against this background that Tariq issued his plea for peace.

Labels: Tariq Jahan and his plea for peace