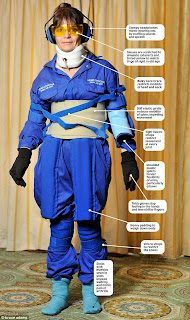 With Britain predicted to have more and more old men, help is at hand, for Howard Jeffreys has invented a 'mobilistrictor’ which will allow young men and women to experience what it’s going to like when they are old.

"Most of us have absolutely no idea of what it’s like to be old," said Howard, who works in 'construction' and was appalled by how few buildings take into account elderly people’s needs.

"Instead, we stand there huffing and puffing in supermarket queues as some poor soul struggles to find coins in his or her purse, or tutting with irritation when it takes them half a minute to get out of a chair. This is all about understanding how it really feels."

Howard’s suit has :
* been stitched and moulded by Jacqueline, his wife and because it’s about 'feeling' rather than 'looking' old, has no prosthetics, specs or grey wigs, just a baggy boiler suit with bits of plastic and bandage and a tight elastic girdle.

* movement at each joint restricted by tightly-drawn Velcro, strapped across the body and plastic splints hindering the flexibility of the arms, particularly the extension of the elbows.

* splints and gloves desensitising the hands and a brace reducing mobility in the head and neck.

* a pair of socks with marbles sewn into the soles, since, said Howard : "Elderly people don’t move quickly, so the socks slow you down and give an idea of what it’s like to have arthritis in you feet. More than nine million people have arthritis in this country. It’s very simple, but very effective."

In addition, there is simulation of failing hearing, created by a pair of headphones, failing sight, courtesy of a pair of yellow glasses, scratched to simulate cataracts and tinted yellow because as we age we see things with a slight yellow tinge.


Wearing the suit means that :
* getting into a chair involves levering on the arms to get part way down and then flopping down on to the cushion and getting up is even trickier involving rocking forward to get enough momentum.

* lifting a heavy casserole out of the oven is extremely difficult and vacuum cleaning is an ordeal involving trying to reach the plug, fumbling for the switch, dropping the handle and tripping over the flex.

If Michael Gove, provided funding for suits to be provided to secondary school to allow school children in to experience what it like to feel old, would this change the perception of the young towards the old in Britain ? I think I know the answer.

P.S. Howard's suit is generating interest in the Far East :