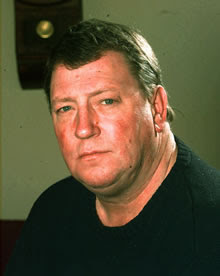 Iain Blair, Scottish actor and author who, using the pen name Emma Blair wrote a series of romantic novels, has died at the age of 69.

Things you possibly didn't know about Iain, that he :

* was born in Glasgow in Scotland, where his father died from died from tuberculosis shortly after his birth and his mother died when he was eleven, moved to the USA to live with an aunt and after graduating from Milwaukee, returned to Scotland to work with an insurance company.

* became bored with his job, moved to Australia at seventeen where he worked as a proof reader on a Sydney newspaper and a life guard at Sydney's South Steyne Beach.

* after a year, returned to Glasgow where he worked as a 'feature writer' on the 'Sunday Post' and then following a visit to the cinema to see Burt Lancaster in 'The Flame and the Arrow', resolved to become an actor.
http://www.tcm.com/mediaroom/video/443134/The-Flame-and-The-Arrow-Original-Trailer-.html

* won a place at the 'Royal Scottish Academy of Music and Dramatic Art', graduated, got work with the Royal Shakespeare Company and during a 20 year career in acting, had parts in many tv dramas including one in which he, as a Scottish oil man, conned David Jason with a dodgy deal in the comedy 'Only Fool's and Horses' :
http://www.youtube.com/watch?v=dlMHfrZ6eR8

* went to audition for a part in the 1981 film 'Raiders of the Lost Ark' and recalled that, after a difficult journey to the studio followed by a long wait " eventually a rather small man came into the room. "I'm Steven Spielberg. Can you come back tomorrow?" "No, I fucking can't," I replied in traditional Glasgow fashion. And that was the end of my acting career."

* began writing while a stage actor, initially plays for theatre and tv and then unsuccessful 'thrillers' before switching to romantic fiction and on submitting 'Where No Man Cries' to his publishers in 1982, it was suggested the book would sell better if the author was a woman and so he adopted the pseudonym Emma Blair.

* once joked that "The publishers decided on a sex change and so that was that. Emma I became and Emma I stayed." and when asked 'what kind of person Emma was ?', replied: "Probably about late 40s, a bit of a tough cookie and had a certain amount of personal tragedy, which is why she writes with such passion." His wife once commented that : "Emma was not the quiet, retiring type but a 6ft 3in Glaswegian who enjoyed a pint and a smoke."

* wrote 30 novels over 20 years and kept his identity secret until 1998, when his novel, Flower of Scotland was nominated for the 'Romantic Novel of the Year Award', required him to admit to being the author of the books.

Iain, one of Britain's most popular authors with his books the most borrowed from British libraries, was forced to give up writing in 2007 after being diagnosed with diabetes.

Alasdair Steven writing in 'The Scotman'said:
"Many of his books were of that genre: strongly romantic but very realistic. Blair had a fine ability to reflect social conditions within the body of his writing while the romantic element provides the main thrust to the story. He was a fine wordsmith and an exceptional story-teller...demonstrated in his acclaimed 'Flower of Scotland', about a family of whisky distillers in Perthshire as the First World War is about to break out. The family face many problems and as the war ends, they return to Scotland much changed."