Britain is no country for a sad old shopkeeper called Maurice Reeves, owner of an old furniture shop burnt to a shell in a riot 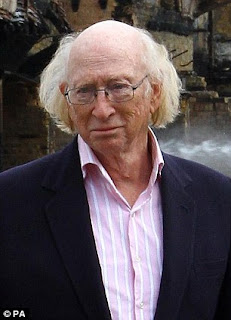 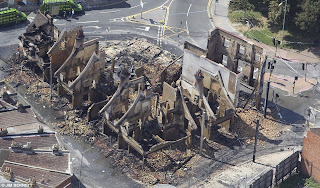 This is 80 year old Maurice Reeves and these are the burnt remains of his shop which had been im his family in South London over 5 generations for 140 years.

While Maurice was celebrating his wedding anniversary to his 72 year wife at a restaurant in Central London, a mob was rampaging through Croydon High Street and his store became a target and was firebombed. The first he knew of it was when he got home, turned on the tv and saw his shop in flames.

"What kind of people would do that?" asked Maurice in disbelief and sadness as he stood at a police cordon the next morning with smoke belching from the ruins of his shop.
"Our shop was the hub of this community. We’ve weathered so much, only to have our shop smashed up by people in our own community. I’m shocked to the core."

Maurice began working in the shop shortly after the end of the Second World War in 1945, when he was 16 and said: "Children used to be well-behaved then but these days it doesn’t seem to be the case. A lot of them leave school without the basic skills and sometimes parents aren’t doing their job."
"When I was a boy there was so much more of a sense of law and order in the community. There weren’t the troublesome types and we’d all be home by 10pm." 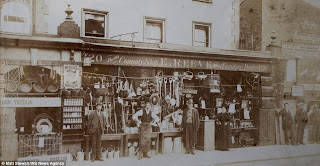 His shop had been founded by his Great-Great-Grandfather, Edwin in 1867 and in the photo Maurice's grandfather, is pictured second from left in the apron while his great grandfather Edwin, stands next to him, second from right

During the Second World War, when much of Central Croydon was destroyed in attacks by German V-1 flying bombs and V-2 rockets, the store survived and Maurice remembers hiding in the cellar during air raids.

When he retired, the running of the shop have passed to his two sons and on Tuesday they joined him at a meeting with Prime Minister, David Cameron, to air their views when he visited Croydon fire station.

On a visit to the scene the London Mayor, Boris Johnson, described the shop’s destruction as "heart-breaking" and "It’s just unbelievable and it’s scarcely possible to believe that this is London. What kind of sense does it make from the point of view of the rioters and the looters to destroy a business that is actually creating business and wealth in the community?"

London Police Deputy Assistant Commissioner Stephen Kavanagh said: "We understand the level of distress. Anyone who saw Mr Reeves on the TV and didn’t have a lump in their throat is not a human being."