A study by 'Yours Magazine' claims that teenagers are as lonely as old people because they spend so much time making 'virtual friends' on sites such as 'facebook', that they find it difficult to make real-life mates.

* the average teenager spends three and a half hours a day on social network sites and a third talk more 'online' than 'in person' with friends.

* making ‘proper’ pals is increasingly difficult for young people despite them each having an average of 243 ‘friends’ on Facebook.

* two thirds of those aged under 18 do not consider Britain to be a friendly country.

The 'Relationships Expert', Julie Peasgood, believes technology is isolating people : "You can’t hug a 'Facebook' friend. Touch calms us, heals us and allows us to connect with other people."

"Modern society doesn’t encourage us to speak face to face," said Valery McConnell, Editor of Yours Magazine. "As a result, loneliness levels in Britain are soaring to crisis point and are set to get even worse. Eighteen year-olds are as lonely as 80-year-olds. What an indictment of Britain that such a simple need – friendship – is beyond the reach of most."

P.S.
An earlier postings where I dealt with 'facebook' and attitutudes to old men :
Sunday, 29 May 2011
Britain is country and facebook a social network for people who do not love old men
http://britainisnocountryforoldmen.blogspot.com/2011/05/britain-is-country-and-facebook-social.html

Tuesday, 28 June 2011
Britain is a country where for many old men " loneliness is their only constant companion
http://britainisnocountryforoldmen.blogspot.com/2011/06/britain-is-country-where-for-many-old.html 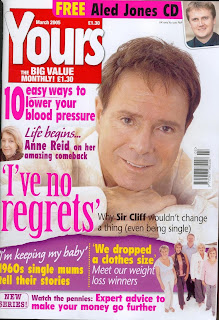 P.P.S.
It is encouraging to note that the magazine has got time for a 71 year old singer called Cliff Richard.