Will Britain become a country like Germany, where old men wait for non existent buses in the gardens of their old peoples' home ? 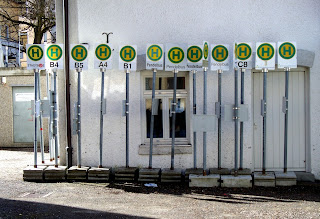 I thought the story about phoney bus stops outside old peoples' homes in Germany was worth investigating.

* Simone Zmura, Director of a Hamburg retirement home, told a local newspaper :
" People suffering from dementia can be very restless. They need to move, and they often want to leave and get out".

* A year ago, the home decided that 'if you can't beat 'em, you have to join 'em' and like many twilight homes in Germany, installed a bus-stop in the garden for restless Alzheimer's patients.

* Many old men and women will sit there for hours, waiting for a bus which never comes, convinced they left the oven on in the apartment they haven’t lived in for sixty years.

* Richard Neureither from a home in Duesseldorf told a TV station :
"You can't rely on rational arguments with dementia sufferers, you have to enter into their reality."

* most carers agree that allowing the patients to go along with their urge to head for the great blue yonder is the most humane option.

* Sabine Gruenwald from the Muehlenau Residence in Hamburg, which introduced the scheme last summer said that :
"The sense that they have the freedom to do what they feel they need to do is very soothing to patients".

* Sabine also said that patients' families approve wholeheartedly and :
"Relatives are invariably glad that the patients are allowed to roam about and can go and sit down outside. We're thinking about getting a roof for the bus-stop so they can even go out in the rain."

* Another old people's home in Remsheid had the same idea, and goes one step further by fitting out the bus-stop with adverts and timetables dating back thirty years to give the oldies a sense of familiarity and a reminder of days gone by when they were younger and fitter.

* While dementia tends to destroy short-term memory, long-term memory can often remain more reliable and ties to the past can help patients feel more relaxed. Sabine Gruenwald agrees. "We’re planning on redesigning the bus-stop in a 1960s look," she said.

I think that the Beatles 'Help' poster would the most appropriate.