An article in 'The Gaurdian' last month was entitled :

Rahel Eckardt, a Senior Physician at Berlin's Evangelical Geriatrics Centre has been behind an industrial-style futuristic boiler suit which gives the wearer the sense of what it's like to be old. "My aim is to turn young energetic people into slow, creaking beings, temporarily at least. That way they will I hope, develop a feeling for what it's like to be old."

The 'Age Man' suit, custom-made to simulate the physical consequences of old age ;

* has ear-protectors which stifle hearing.

* a yellow visor which blurs eyesight and makes it hard to distinguish colours.

*  knee and elbow pads which stiffen the joints.

* a Kevlar-jacket-style vest which presses uncomfortably against the chest and padded gloves.

*  to sensitise a whole new generation of doctors to the medical and social needs of Germny's fastest-growing population group.

* argues that there is a huge disconnect between large sections of the medical profession and their elderly patients, as well as a desperate lack of doctors willing to go into geriatric medicine.

* said : "Rather than a PowerPoint presentation, this is the best way of giving them a real idea of what it's like to be old – that is, 75 and upwards – and only once we have their empathy can we really begin to win students round to becoming interested in old people as patients. Maybe then they will consider a career in geriatrics, which until now has fought for recognition alongside other fields of medicine that are considered to be more exciting."

The EGZB developed the suit together with the Saarbrucken-based Meyer-Hentschel Institute, which supports research into 'senior friendly' products for the over-60s. It hopes to sensitise a society which has done very little to prepare itself for a demographic time bomb more acute in Germany than almost anywhere else in the world, apart from Japan and Monaco. By 2030 more than 26% of the German population is expected be over 65. 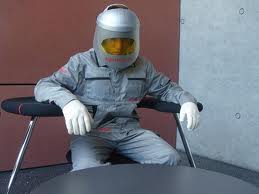 Elisabeth Steinhagen, 22, a second-year medical student at the EGZB, said her experience of the suit had contributed to her interest in the health of old people :
"Geriatrics is a relatively new field, which doesn't have the status of other areas of medicine like surgery but it involves a great variety of illnesses, not just arthritis and dementia and so is a fascinating field. If we're going to take it seriously, doctors need to develop social skills, like learning to speak louder and clearer, or to appreciate that things that are easy for us, like getting out of bed, are more difficult for older people. They might sound like basic things but it's amazing how many doctors don't think about them."